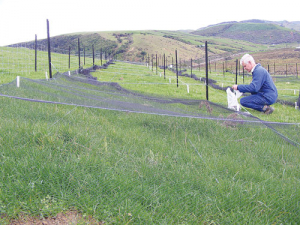 Grass grub and porina are causing $2.3 billion of damage to New Zealand pastures annually, according to an AgResearch study.

Of the total estimated annual losses in average years, up to $1.4b occurs on dairy farms and up to $900m on sheep and beef farms.

But scientist Colin Ferguson says this figure relates only to the damage to pasture and doesn’t include the cost of replacing the pasture, destocking and restocking and the long lasting damage to affected pasture.

The survey was part of the Pastoral 21 Next Generation Dairy systems funded by Fonterra, DairyNZ, Beef +Lamb NZ, DCANZ, MBIE and AgResearch.

Ferguson says their figure is based on an extensive study of all the scientific papers and literature on each of the pests in NZ.

He reckons many of the pests tend to be region-specific. The big one is grass grub, which occurs everywhere south of Waikato. In the sub-tropical north it’s less a problem.

Porina also is pretty much nationwide apart from the top of the North Island, he told Rural News.

“We must also consider black beetle which is a problem in the north of the North Island; but south of Hamilton, apart from some areas around Te Kaha, it fades out because the climate is not suitable for it. On the other hand, we get nematodes which are all over the place.”

The ability to control the variety of pests varies, he says. In the case of porina and grass grub, it is possible to predict when these pests are going to cause damage and how bad that might be.

Farmers in regions with regular problems with any of these pests try to farm around them because they are difficult to control and they may not want to use insecticides, Ferguson explains.

But they don’t often plan for this so when damage occurs they haven’t got anything in place to deal with it.

Ferguson hopes this survey and the data now available will prompt farmers to recognise the cost of damage caused by pests and act ahead of them.

Ferguson says while climate change is having some effect on the spread of pests, it is not a major issue yet.

But it is happening, he told Rural News.

For example, Argentine stem weevil 25 years ago was not a problem in Southland and Otago because it wasn’t warm enough there for it to persist more than one generation a year. It needs to persist at least two generations a year to cause damage.

“But now we are seeing two generations of Argentine stem weevil in most regions down south so we are seeing some effects. And rudium black beetle is spreading southwards down the coast of the North Island.