Insects as effective as bees for pollination 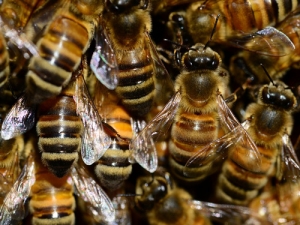 Research has found that "non-bee" insects are as important as honey bees in pollinating flowers.

Research has found that "non-bee" insects are as important as honey bees in pollinating flowers, a service vital for crop production.

In a study published today in the Proceedings of the National Academy of Sciences, a global research team, including scientists from Plant & Food Research, analysed honey bee, other bee and non-bee insect visits to 480 fields of 17 different crop types on five continents.

The research found that total pollination services provided – based on visitation frequency and pollen deposition per visit – was the same for honey bees and non-bee insects (38%), with around a quarter of services (23%) provided by other bees. In addition, fruit and seed set of crops was enhanced by increased visitation by non-bees and other bees, but not honey bees.

"Honey bees are well-documented as effective pollinators of many crops, but this research shows that other insects, such as flies, wasps, beetles, butterflies and moths, are just as important," says Brad Howlett of Plant & Food Research.

"Whilst these non-bee insects carry less pollen than honey bees, they tend to visit flowers more requently, which balances out the equation. The non-bee insects are also seen to be more adaptable to changes in environment and landscape than bees, so are even more important as pollinators in some situations where land use is changing. It's vital that when we consider pollination services for our commercial crops we don't forget about these other insects as effective pollinators."

The research project included scientists from more than 35 organisations in 18 countries, including three scientists from Plant & Food Research in New Zealand. The study was led by the University of New England, Australia.