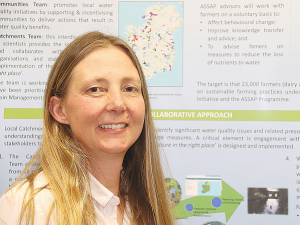 Local solutions to local environmental problems: that’s Ireland’s plan for improving the quality of water in rivers and lakes.

Jenny Deakin, head of the catchment unit of the country’s Environmental Protection Agency, spoke at the annual conference of Massey University’s Fertiliser and Lime Research Centre.

She said that while Ireland’s water quality is good compared with other EU countries, there are still problems. Her unit, new in the EPA, works with farmers to solve their local pollution problems.

She says Ireland had monitored water quality for 30 years, but this changed in 2000 when the European Union introduced a ‘water framework directive’ and so they had to change their monitoring to meet the EU rules.

“The commission wanted to look more at the ecological health of the rivers and waterways, rather than just the nutrient concentrations. It’s a more rounded protocol, in place only since about 2010.”

While farming in Ireland and NZ are similar, dairying does not predominate, but instead beef, with 140,000 beef farmers vs only 15,000 dairy farmers. So the impact on waterways is more evenly spread than in NZ, where dairy is seen as the chief polluter.

“In Ireland, beef is definitely in the mix because beef is widespread, and we know of water quality effects from outside the dairy areas as well,” Deakin explains.

Ireland’s beef industry is not profitable these days, and to stay in business farmers work off-farm; so they pay less attention to environmental issues with greater effects on some poorly drained soils.

“Ireland doesn’t have the same public reaction you have here with the ‘dirty dairy’ campaign and all that; we don’t have that sort of campaign,” she says.

Jenny Deakin has a team of catchment scientists who do stream walks and find out where the nitrogen, phosphorous or sediment is entering a stream.

Once they have identified the problem they pass this to another team specialising in dealing with agricultural pollution.

These ‘sustainability advisors’ do not have a regulatory role but are instead solution seeking.

The Irish Farmers Association (IFA) is also in support.

“They realise that the clean and green image of Ireland is important to protect and they need to demonstrate green credentials.”

The sustainability advisors, whose advice is free to farmers, “are helping them to understand what is going on in their local stream, farm and catchment area and make the changes needed.”

She points out that no farmer in their right mind gets up in the morning and deliberately sets out to pollute a waterway.