Is TPP a goner under Trump? 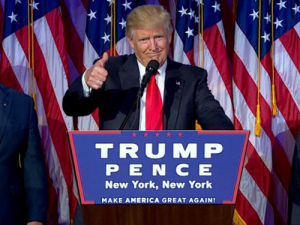 Questions marks in general hang over the trade issues – and it’s a matter of wait and see, they say.

BNZ’s head of market economics Stephen Toplis says the two key Trump outcomes that New Zealand should be interested in are:

He’s anti-globalisation so will stymie TPP and the stimulation of global trade generally. In the first instance this might be negative for New Zealand but might just mean that New Zealand has to be more effective in making bilateral rather than multilateral agreements.

Trump’s expansionary fiscal tendencies are likely to result in higher US inflation and higher US bond yields. These higher yields will also put upward pressure on New Zealand longer dated interest rates. It may also result in a higher USD. More time and detail is needed before drawing conclusions.

The ASB economics team say Donald Trump’s fiscal policies are inflationary through tax cuts and added government spending that would stimulate US growth. The mix of monetary conditions for NZ would likely shift in a favourable way to a lower NZD/USD.

“But these impacts could be tempered or even swamped by any protectionist trade actions that impact broader global economic growth,” the ASB says.

Markets initially reacted to Trump’s victory with a move away from risky assets. However, this was completely reversed overnight, with a strong lift in equities and a lift in global interest rates, the ASB says.

Trade expert Stephen Jacobi says impacts and choices for NZ under a Trump Presidency are unclear at best.

“In the short term I find it hard to see a way through for TPP in the lame duck session,” says Jacobi, a former diplomat who is executive director of the New Zealand International Business Forum.

“Longer term the issues behind TPP (market access, better trade rules, actions to promote investment and reduce the costs of doing business) will all need to be addressed.”

Questions remain over who will advise Trump on trade, what will happen about various trade agreements and other multilateral agreements and the future of China-US relations.