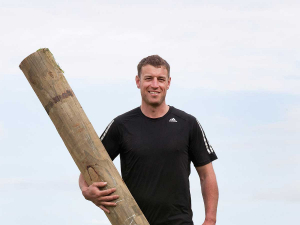 It’s a chance for farmers to talk one-on-one with industry innovators and leaders and has  become a key go-to for the region’s farmers, as well as attracting some from further afield.

Don’t expect any sugar coating from Taranaki dairy farmer turned wellbeing advocate Kane-O Brisco. He tells it like it is but his words ring true with his peers.

“People just want change,” says Brisco, who is a guest speaker at the East Coast Farming Expo. “People are tired of losing people in their community and loved ones to suicide and accidents. There is a strong desire for a change in the way we approach things.”

In January 2019 he created a bootcamp exercise programme for farmers and things have mushroomed from there. As someone who had never been on social media, he now has a Facebook page where he talks frankly about both mental and physical fitness and wellbeing.

“For me it really started when I was 18 and I took up boxing. It was a life-changing moment. I went from being real low in confidence and shy and quite an introvert to someone quite different.”

Quite simply – he walked into the ring as one person and left as another. “I understood the rewards from challenges both mentally and physically and from that moment on I just wanted to pass that on to others.”

Sporting challenges and success is no stranger to Brisco, a former age group and regional senior level rugby representative.

“Five or six years ago the payout was very low and a lot were struggling . . . including us. Once I got myself right, I knew there would be a tonne of other farmers the same as me and that was the juice that got the engine started.”

Just over two years ago he got a shove from someone and bootcamp was up and running, with his Farm Fit NZ brand established not long after. His “little farm gym” is well used by up to 18 men and women who range in age from teenagers through to their mid-fifties . . . and they’re not all farmers either.

“These challenges aren’t just facing farmers but I think there are different drivers and pressures for farmers, so it is a unique set of things that drive mental stress or health.”

His Farm Fit NZ page has nearly 5000 followers, a figure that still has him shaking his head but it is certainly his very grounded and real dialogue that resonates with so many.

“It has to be grass roots to get through,” he says. “It has to be the neighbour next door talking about things. It is all very well to have figureheads and organisations leading the way but real change has to happen from your neighbour and yourself. I am big on conveying that I am just an average fella.”

He now has to think about content and more. “It is a massive juggling act between Farm Fit NZ, my family and work. For the past six months it has been a bit of a struggle to find the right balance between it all. I have to be very time efficient and make sure I am prioritising the family.’

His little family is growing. He and wife Nicole have three children – seven-year-old Ahli, four-year-old Parker and four-month-old Dempsey.

“A lot of the stuff I put on Facebook is spur of the moment stuff. I may have had a general discussion with others and that will spark a thought. When I am milking I daydream away and think about life – a lot has been what I have already been through and learnt my lessons. I tend to be one that the old brain doesn’t really turn off.”

He is regularly contacted by people – some thanking him for his words of wisdom, others tell him their own stories and some say he has helped them stay alive. “I feel pretty humbled. I know how hard it is, particularly for men, to share their stories, so it is special. Some have said I have made that difference . . . that’s pretty crazy. It is hard to put into words but it fuels my fire to keep doing it. If I hadn’t had feedback like that I don’t think I would have kept doing it. I know there is a need for it and to know I am helping is huge.”

Kane-O is only just starting out on his public speaking rounds. “I am pretty nervous but I am excited for the challenge of a different audience to get the message across.”

It is another thing outside of his comfort zone . . . just as the Facebook posts used to be. “It is a bit of fake it til you make it but I do have some practical ways for everyone to look at their own mental and physical health. It’s always better to be pro-active rather than re-active.”

Pāmu (formerly Landcorp) is right behind Brisco and the message he brings to farmers and other rural folk all over the country. “We are one of New Zealand’s largest farming companies with more than 700 staff, most of whom are on farm,” says Pāmu head of communications Simon King. “We have a strong focus on mental health for our workers and his message is an important one for us all. Sponsoring a Cuppa with Kane-O is something we are certainly proud to be a part of.” A Cuppa with Kane-O is being held on Wednesday (February 24).

WHAT: Pāmu Cuppa with Kane-O at the East Coast Farming Expo