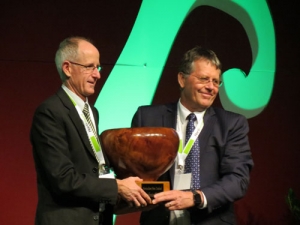 The new award is intended to recognise outstanding and inspiring leadership within the horticulture industry.

Greaves has spent his life in the Bay of Plenty where he has experienced the ups and downs of the horticulture industry.

In 2010, Psa disease began wiping out New Zealand kiwifruit crop and Greaves realised that growers needed support. He developed a unique framework to give rural people the opportunity to communicate about their feelings and situations.

“He has made a positive difference to our industry by developing a system that deals with the seriousness of life during rural crisis.”

“He has helped rural people to recognise stress is something that does not have to be endured on your own.”

John Wilton was recognised for his long-serving commitment to the pipfruit industry.

The industry service awards were also presented for the first time.