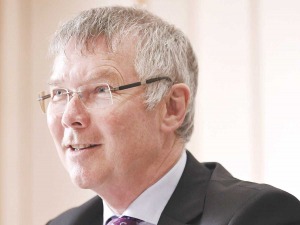 Environment Minister David Parker praised the hort sector for its "extraordinary achievements" in the face of Covid-19-related challenges.

Parker noted that like other sectors, fruit and vegetable farmers and exporters have been dealing with local port congestion, labour shortages, global shipping delays and disruption to supply chains - all knock-on consequences of Covid.

However, for some fruit and vegetable growers, especially in parts of the South Island, hail and floods caused further misery.

"And yet despite that, you have a success story and you continued to feed the country," Parker told 700 delegates at the two-day conference.

He noted that avocado and kiwifruit farmers have had record seasons with avocade exports set to lift 40% on the season prior and kiwifruit marketer Zespri's revenues up 14% on the 19-20 season.

"These are extraordinary achievements," said Parker.

He claims the Government is trying to play its part to help exporters.

"We think our elimination strategy has made things easier than they otherwise would have been. We've had a degree of normality that isn't being experienced in many places in the world at the moment."

Parker noted that the Government's airfreight subsidy scheme has supported 7,000 flights, which so far has carried 136,000 tonnes of freight, worth $10 billion in export revenue.

Keeping the airfreight lines open with key nations like Singapore and the United Arab Emirates required a lot of "ministerial work".

"Through yours and our efforts, we avoided the worst economic disruptions as well."

While Parker acknowledged that some sectors had been badly impacted by Covid, he says success should be celebrated.

"We acknowledge how tough it has been for some growers, with hail problems faced by apple and cherry growers in Central Otago.

"The Government thanks the horticulture sector for your efforts."

He noted that the sector has a good future with Ministry for Primary Industries projecting exports revenue to reach $8b by 2025, up from $4.2b in 2018-19.

Parker pointed out that the sector has lower greenhouse gas emissions than some other sectors. He added that its nutrient discharges to lakes and rivers are also lower.

He says New Zealand's success starts with what farmers do on the land.

"If we don't have your productivity, we have nothing to sell."

Parker also repeated the Government's mantra that, if we want to sell our products at the highest price to the most discerning consumers in the world, we've got to meet their expectations.

"We've got to bolster NZ's reputation, not just in food quality but in environmental standards."

OPINION: Rural NZ is again getting the rough end of the stick when it comes to services - this time in relation to Covid-19 vaccinations.