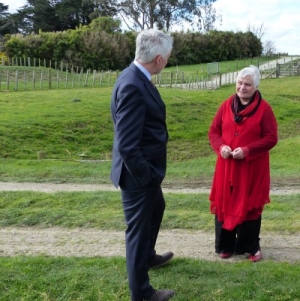 LINCOLN UNIVERSITY has officially launched its lower-North Island base for vocational training and demonstration in lamb and beef finishing systems at a function in the Rangitikei.

The university, along with the newly-formed Lincoln-Westoe Trust, will operate the 400ha Westoe Farm north of Bulls as a training facility, offering land-based certificate programmes for students looking to enter into primary sector careers. The training will have a particular emphasis on sheep and beef farming, and a special focus on training youth from Te Rūnanga o Ngāti Apa.

Westoe Farm will be managed by the Duncan Land Co, and aspects of its operation, including aspects of training and demonstration, will be integrated with the sheep farming and training operation of Otiwhiti Station at Hunterville.

More than 80 representatives from Ngāti Apa Iwi, agribusiness firms, industry organisations, local and national Government, and local farmers gathered for the function that was itself held on Westoe Farm. Among them, was the Associate Minister for Tertiary Education, Skills and Employment, the Honourable Tariana Turia.

The Westoe farm has been gifted to the Lincoln Westoe Trust by well-known local farmers and philanthropists Jim and Diana Howard on the condition that the property be used as an agricultural training facility. Of note, Howard's great uncle, Josiah Howard, bequeathed the land that now forms the Smedley Station and Cadet Training Farm.

"It is a privilege to be invited into the Rangitikei by the Howard family and by Ngāti Apa Iwi," says Lincoln University Vice-Chancellor, Dr Andrew West. "As a vertically-integrated training and educational institution, offering certificates through to PhDs, Lincoln University already trains many students in the lower North Island through its LincolnFirst Telford Division.

"The Lincoln-Westoe Trust and its Westoe Farm offers us a permanent base for our vocational training upon which we will also develop a demonstration drystock farm akin to the two demonstration farms we now operate in dairying. This is good news for sheep and beef farmers. However, what I want to recognise here is the incredible generosity and philanthropy of Jim and Diana Howard, and their family, who, through this donation, have made a major contribution to the wellbeing of youth and of farming in this country," says Dr West.

"The project, whose birth we are celebrating today," says Jim Howard, "is a small step on the road in the challenge of revitalising farming and the country's economic future."

The function was also used to mark the recent Memorandum of Understanding signed between Lincoln University and Te Rūnanga o Ngāti Apa to use Iwi land, including Te Hou (formerly the historic Flock House Farms, also near Bulls), as an extended training facility for Iwi descendants.

The Iwi has made it known previously of its desire to see the relationship with Lincoln University develop to ensure its descendants move into a range of primary sector careers, such as farm management, agribusiness or scientific research.

The new Westoe and Te Rūnanga o Ngāti Apa initiatives come off the back of other recent North Island partnerships that Lincoln University has negotiated, such as the recently-announced Demonstration Dairy Farm with St Peter's School Cambridge; the Training Dairy Farm with Northland College at Kaikohe; and the Memorandum of Understanding with Ngāti Korokī Kahukura and Ngāti Hauā of the southern Waikato to develop an agricultural training centre at the former Maungatautari School, utilising the Pohara Trust farms.