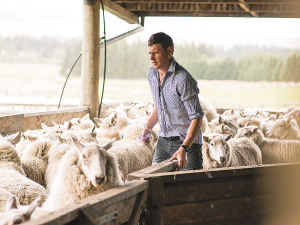 NZ farmers are the first in the world with the ability to breed low methane-emitting sheep. Photo: Kieren Scott.

Each flock consisted for 100 composite ewes (identified as either low or high emitting through the Central Progeny Test programme) and the management of each flock has been identical.

Rowe says on average, they have identified an 11% per unit of feed eaten difference in methane emissions between the two flocks, but most importantly, it appears there is a no difference in the health, productivity or profitability between low or high emitting sheep.

“We are seeing more lean growth, carcass yield and wool production in the low methane sheep without any negative trade-offs.”

This breeding programme, which confirmed that methane emissions were heritable, allowed for the establishment of a breeding value for the trait which was incorporated onto Sheep Improvement Limited database (now nProve) last year.

Mark Aspin, general manager PGGRC, is encouraging stud breeders to take the opportunity to have their rams measured and to start making use of the breeding value.

He says while PGGRC has been pleased with the initial momentum with breeders, it wants to encourage as wider use of the methane selection service as possible and further build on existing knowledge of the correlations and impact with other productivity traits accumulated.

Investment in the future

Southland ram breeders Leon and Wendy Black were amongst the first commercial stud breeders to invest in measuring methane emissions and generating methane emitting EBVs in their Blackdale stud rams.

It was a significant investment. Measuring 84 rams, which represented nine of their main sire groups, cost them $7,500 for the two tests – without labour. A further $7,500 was paid by PGGRC as part of its breeder incentive scheme, making the total cost $15,000.

With no demand for this trait from their commercial clients, it is money the Blacks will not recoup – yet.

However, Leon Black says, as a ram breeder, he’s breeding now for his clients’ needs five years’ down the track. While he concedes as yet there are no economic incentives or market signals for breeders or commercial farmers to breed low methane sheep, he believes it will only be a matter of time.

As a former director of both B+LNZ and the PGGRC, Black has had some insight into the development of the methane reduction technologies. He believes that for the sheep and beef sector, genetics are the most effective way of meeting the sector’s emission reduction targets. “The most cost-effective way for the sector to reduce its emissions is to learn that way and breed animals that produce 10% less methane,” he adds.