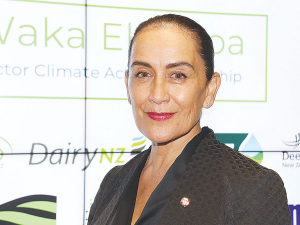 Traci Houpapa claims that Māori warrant special consideration, having come to the table with a long tail of deficit.

Māori supoort for HWEN may be a key factor in winning government support for the primary sector-led initiative.

The Māori perspective is obvious when reading the narrative in the report. Traci Houpapa, chair of the Federation of Māori Authorities (FOMA), says she supports the recommendations in HWEN. She says, from the very beginning, when the partnership was first proposed, Māori strongly advocated for a Te Ao view, which ties in health and wealth of people as well as the wealth of the land.

"Our preferred stance has always been centred on taiao (the environment)," she told Rural News. "The current profit-driven focus of the primary sector industries carries a significant environmental cost. It is not sustainable and we have pushed for a values-over-value approach."

Houpapa says Māori warrant special consideration, having come to the table with a long tail of deficit.

She says they lost 95% of their land post Treaty and almost 60% of the land they got back is hard hill country, which means that when adverse climatic events occur, Māori farms tend to be disproportionately affected when compared to Pakeha farms.

"It is important to remember that FOMA has vested interests in the performance of all the HWEN signatories," she adds. "As significant levy payers into those industry groups, we expect better performance, participation and better partnership and investment into the Māori climate change adaptation process."

Houpapa says the HWEN report has resulted in a series of valuable wins for Māori farmers, growers and landowners.

New Zealand is dismal at telling its story to consumers in international markets and needs to emphasise the unique Maori dimension, says the Merino NZ chief executive and boot-camp leader John Brackenridge.

The Federation of Maori Authorities (FoMA) has come out in strong support of the new Trans Pacific Partnership (TPP) agreement.

Maori business leader Traci Houpapa has been appointed chair of Landcorp Farming. She has acted in the position since May last year.