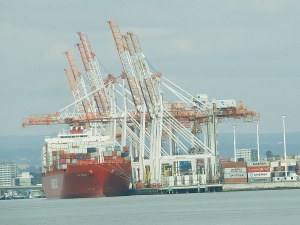 NZ’s meat exporters are caught up in a global problem around the availability of containers and disrupted shipping schedules.

Many of the country’s meat coolstores are either packed to capacity or nearing full capacity due to the shortage of containers.

This comes as the pressure goes on meat processors to deal with farmers trying to get rid of surplus stock as drought starts to bite in many parts of the country.

Meat Industry Association (MIA) chief executive Sirma Karapeeva told Rural News there is a question as to whether there will be enough coolstore space to hold inventory if the container crisis doesn’t ease up. She says her organisation is talking to the Ministry for Primary Industries (MPI) about seeking approval for additional storage space.

“But I also understand that there are number of companies that have been working collaboratively to help each other out with coolstore space, so that is a positive and pragmatic approach to this issue.”

Karapeeva says while there has been no talk within the industry about leasing cool storage space in key overseas markets, she wouldn’t be surprised if individual companies were going down this track.

She believes the availability of containers and disrupted shipping schedules is unlikely to be resolved anytime soon and NZ is just caught up in a global problem.

“There are containers, but they are not in the right place at the right time,” Karapeeva told Rural News. “And because the way the shipping lines have got their schedules, they are either missing ports and are unable load on containers, or they are actively choosing to bypass certain ports in order to keep something that looks like a schedule.”

This view is backed up in a recent report by the Ministry of Foreign Affairs and Trade (MFAT), which notes that in addition to the effects of Covid-19, the grounding of a ship in the Suez Canal has exacerbated the problems. MFAT predicts that there will be a further escalation of global sea freight disruption affecting NZ exports to Northern Europe until at least June. There have also been reports of disruptions in Chinese ports.

MFAT’s report says that there has been severe congestion at Los Angeles and Long Beach ports on the west coast of America. Singapore has also been badly hit with the usual turnaround time of two days being pushed out to between five and seven days. Finally, it says container freight rates have soared to historical highs.

Karapeeva says the situation is quite dynamic and changes quickly.

“Certainly, staff at the processing companies are working very hard to stay in touch with the shipping lines to make sure they have a little visibility of what’s coming down the line,” she explains. “Some of the bigger companies are better placed to manage these challenges than some of the smaller companies, because they might have long standing relationships or might have alliances with other companies such as the Kotahi Alliance. </p.

“The feedback I have from some of the small guys is that it is a week-on-week situation – this week they might be fine and next week the situation might get worse.”

The situation is not just confined to overseas issues. Karapeeva says problems at the Port of Auckland have added an additional pressure point and that is putting strain on the Port of Tauranga to take up the slack.

NZ's meat processing industry could grind to a halt in the next six months unless the Government acts to allow Muslim slaughtermen to come into the country.

New Zealand red meat exports remained steady in April with a total of $863 million worth of meat and co-products exported to global markets.