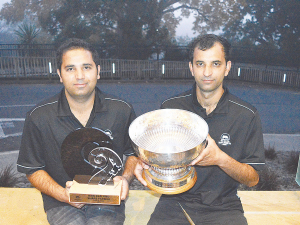 Federated Farmers president Andrew Hoggard says Manoj Kumar and Sumit Kamboj, the 2021 New Zealand Share Farmers of the Year, are typical of hard-working migrants who come to NZ for a better life.

He says migrants add immensely to their local communities – including training and attracting New Zealanders to dairy careers.

“I think they, and others, underline the quality and talent of migrants who choose our dairy sector in which to reach their dreams,” Hoggard told Rural News.

“Their achievements knock for six those who describe the work they do as low-skilled. As we debate, at national level, the role of migrant workers and border security, the success and contribution to our primary industries of these newcomers to our shores is sometimes overlooked,” he says.

Manoj Kumar and Sumit Kamboj say there are progression pathways in the dairy industry for those who work hard.

The brothers, 50/50 sharemilkers on two farms in Eketahuna, took out the top award at the New Zealand Dairy Industry Awards night in Hamilton last month.

“There are lot of opportunities in the dairy industry but only if you work hard – like waking up early in the morning,” Manoj Kumar told Rural News.

Manoj, 34, and Sumit, 28, created history by becoming the first pair of brothers to win the coveted title. They moved from India to NZ about 10 years ago.

Judge John Numan says the message he often hears is that there aren’t any progression pathways because it’s too hard.

“But there are,” says Numan. “These people are achieving it because they have the right attitude that encourages their employers to promote and back them in their business.”

The 2021 Dairy Farmer of the Year is Christopher Vila. Philippines-born Vila beat 10 other regional farm manager finalists to pick up the award.

A trained vet, Vila moved to New Zealand 13 years ago. Starting as a farm assistant on a 1,200- cow farm in Reporoa, he worked his way up to his current role seven years ago – a farm manager on a 340-cow family trust farm in Ohaupo, outside Hamilton.

Ruth Connolly, the 2021 Dairy Trainee of the Year, was described by the judges as a polished and engaging person. The judges said she is articulate, considered and concise with a broad understanding of different industry issues.

Connolly is a farm assistant on the Rukuhia Holdings Ltd – 259ha property at Ohaupo, milking 800 cows.

Dream big and work hard to achieve it, says the 2021 Dairy Farmer of the Year, Christopher Vila.

A rural sector stalwart and mentor to many has been recognised for his contribution to the New Zealand Dairy Industry Awards programme.

There are progression pathways in the dairy industry, one just needs to work hard, says brothers, Manoj Kumar and Sumit Kamboj, the 2021 Share Farmers of the Year.