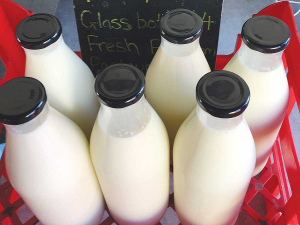 MannaMilk has been fined $30,000 for not following the rules that regulate the supply and sale of raw milk.

A milk business has been fined $30,000 for not following the rules that regulate the supply and sale of raw milk.

Martin earlier pleaded guilty to three charges under the Animal Products Act, including failing to follow raw milk regulations, selling raw milk, and failing to comply with a notice of direction to cease processing and selling raw milk.

“Raw milk is inherently much more of a food safety risk than milk that has been pasteurised to kill potentially harmful bacteria.

“Producers owe it to their customers to follow the rules and take every required precaution to ensure the safety of their product. There is less risk of a person becoming ill from drinking raw milk products when they do.”

Raw milk producers must register with NZFS, meet hygiene requirements, test milk for pathogens, keep records of sales, and label appropriately so consumers were aware of the risks and could make informed decisions about consuming raw milk.

In early 2019 NZFS carried out an investigation, called Operation Caravan, to ensure farmers were following regulations in place to protect consumers.

Martin attempted to avoid the regulations by distributing raw milk to customers through a separate legal entity and claiming it was not for sale.

The investigation found Martin ignored a previous Notice of Direction to cease sales and continued to sell product illegally both through the legal entity and direct to customers.

“Mr Martin went to some lengths to avoid his responsibilities under the law. By contrast most raw milk producers follow the rules and find it easy to do so,” says Arbuckle.

NZFS has further cases involving the illegal sales of raw milk that will be placed before the court.

Nominations have opened for the 2022 Significant Contribution to Food Safety Award.

A dairy farmer whose neglect of yearling cattle led to 11 deaths has been fined $17,500 and warned that he could be disqualified from farming if he appears on animal welfare charges again.