Milking it for deer 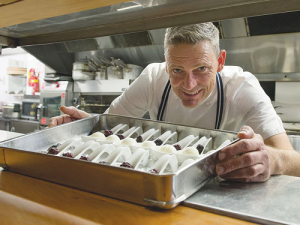 If the world is ready for deer milk, New Zealand is ready to supply it.

The product, believed unique, was simultaneously launched at Fieldays and at a VIP function in Auckland aimed at high-end restaurants and the food service industry.

It won the Grassroots Innovation Award at Fieldays for Pāmu (the commercial name of Landcorp Farming) and its primary partners Sharon and Peter McIntyre, deer farmers at Gore.

“We chucked a lot of ideas up, from the easiest to the hardest -- the hardest being deer milk. The team got together and said, ‘let’s give that a crack!’ ”

NZ knows a lot about farming deer and has many partners, e.g. Agresearch, Agmardt, Asure Quality and the Food Hub, to help pull the idea together, Ford said.

The development has so far taken three years.

Ford said initial questions were whether deer could be milked, what was the milk’s composition and who would buy it. The second year was spent improving the farm system, further investigating the milk and how to powder it, and firming up the market.

“That’s progressively what we’ve worked on as a team over the last three years, culminating in last Monday’s VIP function in Auckland that pretty much launched the deer milk powder into the food service market and high-end restaurants.”

Four restaurants in Auckland and one in Wellington have been supplied with pre-production stocks of deer milk powder and are already serving or planning deer milk-based menu items.

Chefs are enthusiastic about its qualities, said consultant chef Geoff Scott. The reconstituted milk was rich, silky and subtly flavoured, with a fat content high enough to make a quality ice-cream without further added fats, he said.

Sharon and Peter McIntyre milk about 75 hinds, producing 6000L of milk in a season running from November to February/March. The hinds, hand-reared so they are used to being handled, are machine-milked in a purpose-built 10-bail shed.

So far, the refrigerated raw milk has all been sent to Massey University’s FoodHQ drier for processing but Pāmu hopes to transition to an operational unit in the next couple of years, said Ford.

“Once we know and confirm we’ve got a market we will start to ensure we have a template available for all farmers. It’s not just a Landcorp play; it’s an industry play that could open up an opportunity for Landcorp and others to be a part of.”