Miraka off to a flying start 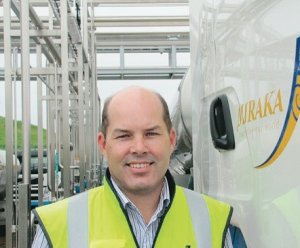 IN JUST its first year Miraka, the new Maori-owned dairy company, is ahead of its production targets.

The major shareholders in the plant are the Tuaropaki Trust, owners of the land where the plant is built, and Wairarapa Moana, owner of at least 10,000ha in the area north of  Taupo.

Miraka chief executive Richard Wyeth told Rural News that next year they will be at 100% capacity – 5%  ahead of their original target.

“Our goal was to sign up enough farmers to take us to full capacity next season and we’ve done that. We’ve had a lot of favourable responses from our farmers. We’ve had a good first season and that’s created credibility among farmers that makes them confident  to come across to Miraka as a good competitive option.

“We did some direct marketing to farmers but word of mouth has also helped and it’s very satisfying when farmers start coming to us and are keen to join Miraka.”

Wyeth says their sales in the first year have gone remarkable well considering they didn’t start making product until August last year when the factory opened. This also meant they weren’t able to take advantage of higher prices of about $4000/tonne for whole milk powder (WMP). But since then Global Dairy Network, which sells for them, has done a fantastic job selling their products.

Wyeth says because of Miraka’s relationship with Vinamilk, a lot of Miraka’s WMP has been sold to Vietnam. “But we’ve also sold into China and other markets in South America and the US. This is mainly WMP but we have also made a small amount of skim milk powder to sell.”

In the coming season the Miraka plant will come up to full capacity, meaning it will lift production from 25,000t to close to 35,000t.

The co-op will need to widen its customer base. “A number of our current customers have told us they want more products, which is a pretty good position, but we will spread our market. The likes of the Middle East, for example, will come on stream for us next season.”

At the same time Miraka continues to grow its links with Vietnam. A recent delegation from Vietnam, led by officials from the World Bank, visited Miraka and some of its farmer suppliers. Wyeth says the delegation wanted to see New Zealand’s milk processing and farming systems and the relationship between farmer suppliers and milk processors.