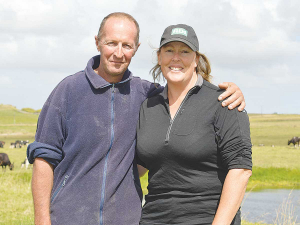 ACT agriculture spokesman Mark Cameron believes the farming community has been let down over the years by both Labour and National.

The Ruawai dairy farmer hopes to be a voice for the farming and rural communities in Wellington.

Cameron, ranked 8th on ACT List, is one of the party’s 10 MPs and its spokesman on primary industries, regional economic development and biosecurity.

With partner Jodie Booth, Cameron milks 300 cows and is a Fonterra supplier.

He makes one thing clear; ACT isn’t averse to doing the right things when it comes to freshwater, climate change and global warming.

“We are all on board with all of it, but what we are saying is that farmers and regional forestry have the right tools in the kit to address these issues,” he told Rural News.

He points out that regional council in Southland and Canterbury are working with farmers at the farmgate around pugging, soil erosion, nitrate leaching and water quality.

“All the conversations are taking place at a regional level,” he says.

“Then the central government comes into the conversation and starts throwing all these arbitrary compliances that farmers can’t practically implement at the farmgate level.

“So, for me personally, there should be fair and honest conversations about how we can fix the problems but apply them at a practical level.”

Cameron points out that farmers aren’t villains. He says they have been a lauded part of society for a long time.

“Farmers were part of society that everyone looked up to, I mean Covid proved that…we just kept trucking on while the economy was suffering and our tourism businesses were hit hard.

“But we’re not getting rewarded for that; we are getting more red tape, more compliance,” he claims.

“About 43% of farmers are awake at night because we are worried about what will happen next year, whether it’s around freshwater, climate change or carbon pricing.”

Cameron believes the farming community has been let down by both Labour and National. He says Labour, while well-intentioned, isn’t listening to farmers, while National is failing to bat for farmers.

Cameron says Labour’s adversarial approach when dealing with farmers is wrong. He is vowing to put pressure on the Government but adds that it’s not his job to be belligerent.

“My job to shore up conversation and bring experience that I don’t believe the Agriculture Minister has,” he says.

Cameron says farmers are “bloody good’ at looking after the environment.

He gives the example of a local sheep and beef farmer who has put in 27,000 riparian plants on his farm to prevent soil erosion and preserve freshwater.

“But the Government doesn’t recognise the farmers’ hard work when it comes to carbon offsetting,” Cameron claims.

“We are saying, why are we having these conversations around carbon emissions…this farmer has already fenced off part of his land into the QEII Trust, but you won’t acknowledge it.”

Cameron believes the Government is continuously looking to be adversarial rather than saying ‘hey you have done a bloody good job, keep doing it’.

ACT MP Mark Cameron says the wool sector must map its own path out of its current doldrums.

The Government should have a limited role and not be constantly writing blank cheques.

He says New Zealand has the best strong wool fibre in the world, with a low environmental footprint.

“Our environmental impacts are considerably smaller than they have ever been – we have gone from 70 million sheep to under 27 million,” he told Rural News.

“And we’re still producing the best meat and the best wool in the world. We’ve got to find a way through a limited role of the Government to help these guys get out of the doldrums,” Cameron says.

“We have this wonderful industry (sheep) so why haven’t we found ways to promote the industry and grow it?”

Cameron says he’s willing to work with the farmers and industry on how they can do better.

“We can help out, but it’s not for the Government to constantly write blank cheques out,” he adds. “The best thing is promoting yourself, industry should lead industry because they are so bloody good at it.”