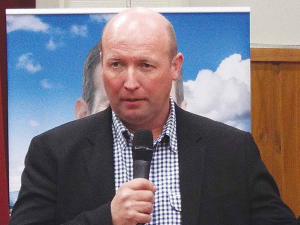 Starting out by commending the current Government’s handling of the Covid-19 pandemic, Bennett raised the question of how New Zealand will pay its bills in the future. He intimidated that the current Labour/NZ First coalition’s policies were reactionary, rather than visionary.

With all the major political parties agreeing that sustainable agriculture, horticulture and viticulture will be vital in a post-Covid future, Bennett suggested that the current drive for sustainability needs to be addressed.

He says this needs to be driven by using good scientific evidence and a consistent approach that doesn’t hurt the key primary sector players. He also adds that these key players and the regulatory authorities must be open to discussions about structured changes and redevelopment.

On the vexed issue of water, Bennett – a dairy farmer in Te Awamutu, Waikato – says three areas need to be investigated.

“Namely, water storage to combat summer shortages or drought conditions. Water-takes to ensure river and streams remain viable in the dryer months. And the needs of urban NZ – in the domestic and industrial sectors.”

Bennett suggested that unemployment will rise to around 10%. On the vexed issue of employment and migration, he says the farming sector faces a serious shortage of skilled labour and will need to bring more skilled migrant workers into the country.

“This will undoubtedly prove to be a major challenge, given that our borders are unlikely to open at any time soon,” he explained.

“So, the Government should be working to extend the terms of any immigrants already in NZ, whose visas are coming to an end in the near future.”

In the same vein, Bennett warned of a looming issue for the rural contracting sector as we approach the harvest season in August/September and the possibility of harvest being delayed or corners cut.

“As the borders are likely to remain closed, they [ag contractors] will be unable to secure the traditional cohort of skilled northern hemisphere operators for high value, high tech harvesting machinery.”

Bennett suggested that the “re-training” of displaced New Zealanders should have started earlier to address this escalating problem.

He also disputes claims by Agriculture Minister Damien O’Connor, who suggested specialists coming to NZ annually amounted to around 350 people.

“In my region alone, the Irish army measures around 100 people, so the Government does not really understand the scale of the problem nationally.”