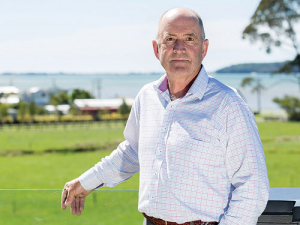 “People in NZ and around the world want our products that have been grown in our great soils with our water and our great climate,” he told Rural News.

“We really do have unique products and the world has woken up to that so we have huge demand and growth will continue.”

But O’Neil says he would also like to see sustainable growth.

“While everyone has to be economically viable we also need to ensure we have a social and environmental focus on our growth.”

One of the big challenges is labour.

“The growth in the horticulture sector, especially in some fruit sectors, has been phenomenal and it is very challenging for them to guarantee their future labour needs.”

He says the social licence to operate is also critical.

“We have these great soils, we have plentiful water as long as we allocate it responsibly and we need to work collectively as growers to ensure we don’t end up being restricted by rules that are not reasonable.”

With 21 affiliated product groups and 5600 growers, O’Neil says his first priority is to get to talk to as many as possible to understand their issues.

“I will be looking to understand how HortNZ can be even more relevant to our product groups and the growers.

“We are always wanting to do better; we have a great team in Wellington who are always outward facing to growers and I want to make sure that continues.”

Some of the government settings on being carbon neutral by 2050 and the Emissions Trading Scheme (ETS) are critically important to get right for horticulture so that the ability to grow is not restricted, he says.

“It is an area of interest to me in which we need to ensure we have sensible policy settings for our growers.

“As chairman there will be many focus areas, but a priority is engaging with growers and ensuring government policy settings especially in the ETS area and water, etc are supporting and not restricting growers.”

O’Neil started his working life as a vet after gaining a Bachelor of Veterinary Science at Massey University. He loved being a vet, but developed an interest in exotic animal diseases and joined the government to keep those diseases out of NZ.

He was involved in these roles for many years, becoming president of the World Organisation for Animal Health in 2006 for three years.

His career in government focussed primarily on biosecurity and that included being posted to Brussels, Belgium as a trade counsellor for four years under the Ministry for Foreign Affairs and Trade.

He headed the biosecurity group in the Ministry of Agriculture and Fisheries (MAF) and has done consultancy work offshore. Most of his professional career has been in food safety, biosecurity and trade.

Latterly, O’Neil was chief executive with Kiwifruit Vine Health (KVH) for six years. He has been a grower since 1984 and now has a kiwifruit orchard near Katikati.

He says he’s always had a strong interest in horticulture and wanted to get closer to horticulture so he focussed on that in the last stage of his professional career with KVH.

During his years with KVH, O’Neil drove the industry recovery from Psa, and has held board positions including deputy chair of Scion, chair of Tomatoes NZ, and chair of the kauri dieback review panel.

He has been an independent director on the HortNZ board since April 2015. But with his appointment as chair he will now stand as a grower elected director at the 2019 director elections.