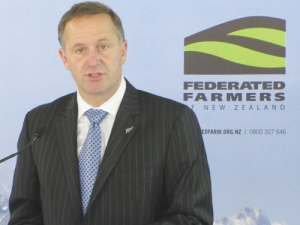 Prime Minister John Key officially launched the 2016 kiwifruit season in China on his visit to that country last month.

A new China strategy that will treble staff there, push into new markets and investigate growing kiwifruit in China has been launched by Zespri.

Chief executive Lain Jager says Prime Minister John Key's official launch of the 2016 season in Shanghai, on his visit to China last month, was a great start to what is set to be a record-breaking season.

China is poised to be Zespri's number-one market by volume this season, likely to achieve about 21% of all sales.

"We anticipate sales of around 24 million trays in 2016, up about one-third from the 18 million trays sold last season," says Jager.

Zespri will expand to five representative offices in-market, increasing staff numbers from 25 to 90 over the next three years and joining with local partners to investigate growing Zespri kiwifruit in China as part of its 12-month global supply strategy.

Zespri also plans to broaden its distribution and sales from tier 1 and 2 Chinese cities and the eastern seaboard, expanding inland into other large provincial cities and more tier 2 and tier 3 cities.

"This expansion will be supported by new regional offices opening this year in Guangzhou, Xian and Chongqing and our in-market staff numbers are set to treble over the next few years," says Jager.

"Zespri is one of the top fruit brands in the cities where we sell and we'll continue to invest strongly in marketing again this year to introduce more consumers to our premium product and build returns to our grower-shareholders."

Zespri will also investigate the feasibility of growing Zespri Kiwifruit in China as part of its 12-month global supply strategy. Zespri sources premium kiwifruit from the northern hemisphere where New Zealand kiwifruit is not available.

"Any decision to potentially source Zespri Kiwifruit in China would be made with our reputation for premium kiwifruit top of mind and is likely some years away," says Jager.

The reason for the increase -- a one-off -- is the release from Zespri's balance sheet of a $13.9 million provision entered in 2012-13 for matters relating to China, it says in a newsletter to growers.

"Zespri's assessment is that all issues relating to [its] subsidiary in China, ZMCC, have now been resolved with the Shanghai Court, therefore there is no justification for Zespri to hold the accounting provision," it says.

Zespri chairman Peter McBride has foreshadowed the range of orchard gate returns and profit for the new 2016-17 season.

McBride told growers the ranges are broad to reflect the early stage of forecasts.