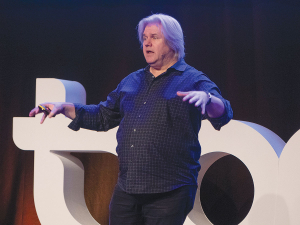 American entrepreneur and consultant Raymond McCauley told the inaugural Grow 2019 Agri Summit that the world will reach “peak humanity” of nearly 10 billion in about 30 years. He says this will require that we grow as much food in the next 30 years as in our entire recorded history, “and we’ve got to do it in 1/400th of the time”.

McCauley heads Exponential Biosciences, a consultancy in integrated systems in genomics, bioinformatics, systems biology and nanotechnology. He also holds the chair of digital biotechnology at California’s Singularity University and is associated with Boma, the international network which organised the summit.

Speaking as “a Texan boy who likes his steak,” McCauley said Impossible Burger 2.0 was about to roll out and was a whole step above the current version. “It’s a game-changer and a wake-up call.”

American company Endless West was producing Glyph molecular whiskey, made to mimic a very high-end 30-year-old cask-aged whiskey which sells for US$2000-3000 a bottle.

Reviews of the product, produced overnight and sold for about $50, range from “surprisingly good” to “can’t tell the difference”.

McCauley believes the faux whiskey is a metaphor for what is going on in food production.

“I’m not saying this replaces the old thing. Not everybody’s going to want it,” he told the conference.

“Will traditional agriculture be replaced? The answer is no, we’re going to need everything we’ve got to get through this next 30 years.”

GMOs require taking DNA from one organism and putting it in another, raising concerns that it could be creating allergies or somehow harming the environment. However, gene editing involves turning up or turning down traits already existing in an organism.

“None of those (GMO) concerns have ever actually come true. This remains one of the safest technologies humans have ever invented. But with gene editing we don’t even have those theoretical concerns.”

He said gene editing is also turning away from simply wanting to increase yields by being able to use more pesticides or herbicides. Instead it is changing the traits of crops so they can grow in different climates or soil types.

An example is a drought-resistant soybean already approved for use in three countries and estimated to save farmers $5 billion/year.

“This is not the product of a big traditional American company. This is from Argentina and a little company called Bioceres. They’ve actually got a whole list of things they’re working on,” McCauley added.