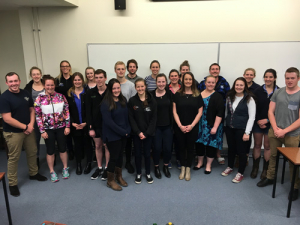 Emma Higgins, Analyst at Rabobank, with the Massey students at their latest RMN meeting.

A tertiary network designed to increase the number of high achieving graduates entering the sheep and beef industry is proving hugely successful in only its second year.

Funded by the Red Meat Profit Partnership (RMPP) which is a Primary Growth Partnership Programme, the network has added to the significant gains the partnership has aimed to deliver in terms of increased productivity to sheep and beef farmers.

“We do this by showcasing a range of pathways for them to take by bringing in inspiring and diverse speakers.”

Smith says it had been encouraging to see many students attend and engage with speakers.

“And those students are often studying in fields as diverse as commerce, arts and food safety.

“They are exposed to a wide variety of domestic and international roles in agribusiness and are shown the many pathways available to take those roles on.”

Aldwell says students quickly learnt that ‘who you know becomes just as important as what you know’, and the programme offered plenty of networking opportunities.

“As I leave university I realise how important networks such as the Red Meat Network are.”

A senior lecturer at Massey, Dr Nicola Schreurs agreed and says the RMP was a great initiative.

“It has been brilliant to see the students step-up and engage with industry representatives and I believe the students are getting useful information and advice from people working right through the red meat value-chain. In the process they are becoming increasingly excited about the potential of meat production in New Zealand”

RMPP work closely with NZ Young Farmers who coordinate the RMN and are looking to increase the number of training providers and students involved in 2017.

Public attitudes are very strong on environmental issues such as clean water and that is driving policy according to the Director of the Farmed Landscapes Research Centre (FLRC) at Massey University.

The Government has announced a new scholarship aimed at boosting global scientific expertise in agricultural emissions.