New role too good to ignore 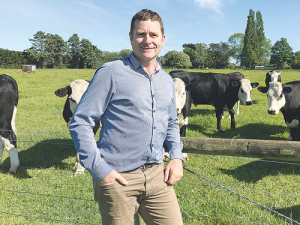 The role of project manager for the Red Meat Profit Partnership (RMPP) Action Network programme was too good to ignore, says Brendon Patchett.

“What attracted me was the opportunity to be involved with a well-resourced and focused programme that would make a difference for the agricultural sector,” he said.

Patchett grew up on a small Marlborough farm and has years of experience in the rural sector and IT, which has included developing and rolling out the RMPP Action Network programme.

He first worked as a livestock drafter in Marlborough and North Canterbury, then gained a BCom from Lincoln University, followed by 14 years in IT.

In 2014 he returned to the rural sector in IT, in a business development role with livestock data management firm Agtrac. There he encountered RMPP and the network programme, which he joined last year.

The network is made up of small groups of seven to nine farming businesses; farmers work together with other like-minded farmers and rural professionals to identify ways to improve the performance of their business.

Groups are facilitated by rural professionals and $4000 per participating farm business is available to pay for facilitation support and to bring in relevant subject matter expertise.

RMPP began rolling out the Action Network in late 2017 and 950 farmers are now involved, with 150 regionally spread groups; 89 groups have submitted their plans and have started receiving funding. The goal is to engage with 2550 farmers and to set up 300 groups.

“The network is underpinned by research,” Patchett says. “That informed the development of the model and was tested via a farmer pilot programme.

“The network takes a small group approach with farmers learning from other farmers, supported by other relevant knowledge and expertise.

“This helps farmers increase their confidence to act and make positive changes to their farm business, leading to increased productivity and profitability.”

He says a common focus, structured approaches and the kick-start funding for each business are key.

“Strong facilitation is critical to successfully run groups: 350 rural professionals have been trained to be facilitators, with 74 already approved and working with groups.”

Patchett will lead the design, development and roll-out of the network.

“There’s strong momentum within the network now. We’re seeing an increase in the number of farmer groups registering. There’s also increased understanding and awareness about the network, including how it can be applied in ways that enable farmers to navigate challenges or investigate ideas.”

RMPP works with farmers and sector businesses to develop, test and introduce information and technology.