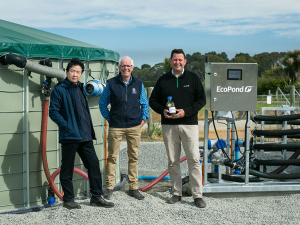 Ponds are the second largest source of methane on a dairy farm – behind direct emissions from the animals themselves. Ravensdown says its Eco- Pond system could cut total farm emissions by 4% to 5%.

It also reduces odour and risk of phosphate loss from pond effluent when spread on farm.

The automated “plug and play” in-line system can be retrofitted to existing ponds and uses the same ferric sulphate additive as ClearTech, metered into the pond by a computer-controlled pump and mixing system.

Cameron says the larger the pond, the more micro-organisms there are in the pond to generate methane.

“This new system has been tested in the lab and at farm scale, where it proves enormously effective at essentially nullifying the methane-creating process.”

Di adds that EcoPond reduces the risk of Dissolved Reactive Phosphate loss to water by up to 99%.

The EcoPond is available for farmers to use now. Ravensdown general manager innovation and strategy Mike Manning says the New Zealand dairy sector is already a world leader in carbon emissions efficiency, but the country has set a 10% target of biogenic methane reduction by 2030.

“This new tool in the farmer’s toolbox has the benefit of robust science behind it and will assist farmers who want to start tracking towards that target now,” he says.