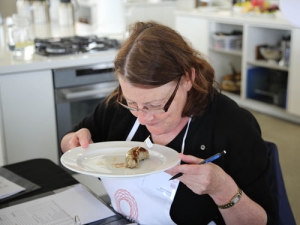 Kathy Paterson at the Semi Final.

New Zealand's top sausage is just over a week away from being announced.

The 22 gold medallists from 11 categories will go on to the Grand Final in Auckland on October 21st, in the hope of taking out the 2015 Supreme Award.

"Each year I am impressed by the amount of skill Kiwi butchers have, which is evident in their product," he says.

President of the New Zealand Food Writers Guild and semi final judge, Kathy Paterson, says she is impressed with the amount of effort butchers have put into this year's competition.

"Each sausage manufacturer leaves their own stamp on their product. There are some excellent flavour combinations which the butchers have put a lot of thought into," she says.

This year marks the 22nd year of the iconic competition, acknowledging the skill of New Zealand butchers and small goods manufacturers, while pointing New Zealander's in the right direction for the best sausages this summer.

The Grand Final will be held at Billfish Cafe in Auckland on October 21st. The competition is supported by Devro New Zealand, Kerry Ingredients and Alto Packaging.