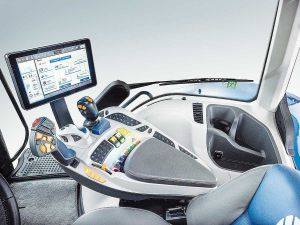 NH's SideWinder Ultra armrest, which groups the tractor's key controls ergonomically in a single location, picked up an ASABE award.

The awards were given out by the American Society of Agricultural and Biological Engineers (ASABE).

The first was for NH’s SideWinder Ultra armrest, which groups the tractor’s key controls ergonomically and logically in a single location. These include engine and transmission, including speed and end-of row functions, three-point-hitch limits, media and climate control.

The SideWinder Ultra is a fully customisable operator interface that works in conjunction with the IntelliView 12 touch monitor.

The other function to win an award was the Ground Speed Management II system that adds features to the New Holland Dynamic Comman tractor, increases efficiency.

A vehicle operating interface and speed control system, like that of the Auto Command CVT, interacts with key gearbox and engine loadings to maintain the speed requested by the driver. This serves to reduce fuel consumption and improving operating efficiency with minimal operator input.

Meanwhile, in other news from the New Holland and Case IH camps, CNH Industrial N.V. has agreed to acquire ATI Inc, a global manufacturer of rubber track systems for high horsepower tractors and combine harvesters.

The company says this will provide CNH Industrial’s customers of global agricultural brands with access to factory-fit track technology, enabling them to tailor their choice of specific floatation, suspension and traction requirements.

CNH Industrial has had a long-standing commercial supply agreement with ATI Track Systems dating back to 2012. The tracks come as an option for the New Holland T9 articulated tractor range.

The new track systems will be available on all Case IH and New Holland combines produced at the Company’s Grand Island, Nebraska, U.S.A. facility starting in 2021, and will also be available for retrofit.

The first production unit of the T6 Methane Power tractor, a cornerstone of New Holland's energy independent farm concept, was presented at the Agritechnica show in 2019.

JD picks up a swag of awards