Nitrate sensor to hit the market 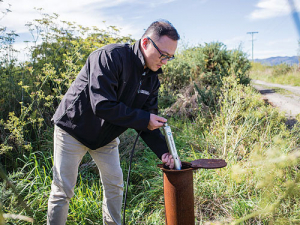 A Lincoln-developed optical nitrate sensor for groundwater is now in use nationwide after a low-key but successful commercial launch.

Developed by Lincoln University-owned Lincoln Agritech, the slim stainless steel device is designed to be lowered down bores and wells for real-time monitoring of nitrate levels.

It is cheap and simple enough for widespread deployment, the company says.

Dr Blair Miller, Lincoln Agritech’s group manager of environmental research, told Rural News that after six to eight months of limited release “to make sure there’s no hidden fishhooks,” the device is now ready for much wider distribution.

It is being marketed under the brand name Hydrometrics and an Australian distributor has been appointed.

Miller says the sensor had been in use at the Hinds-Hekeao Managed Aquifer Recharge project – from prototype through to the current commercial model – and was giving good results. Five regional councils have bought or leased it, so have companies.

Miller says that unlike some alternatives the Hydrometric sensor fits down a 50mm sampling well, which was much less expensive than drilling larger bores.

At about US$S5000 it’s also “price disruptive” when similar technology typically cost upwards of US$15,000.

“We’ve actually brought the price down to a level that farmers could start looking to use it themselves to understand the impact of their own operations. And we have sold it to farmers.”

“If you can’t measure it you can’t manage it,” he says. “One of the drivers behind the sensor of course is to give all stakeholders who are interested a cost-effective and reliable option to measure water quality, but particularly nitrates.”

A surface water variant is now in development, although it would have to handle a much larger range of contaminants.

“To come up with a lower-cost version of a sensor suitable for surface water is a challenge but we’re well into the initial research phase.”