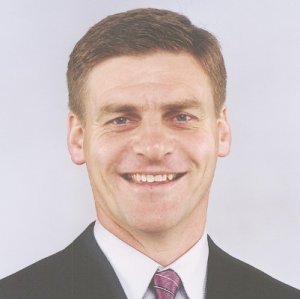 And don't wait for the US and Europe to fix their problems because it could take 15 years or more.

"The world is not going to lend us the money," English said. "We can't grow with debt, we are going to have to earn it. For some parts of the community that is a new experience but not to this sector."

Ënglish said over the next 15 years the US, UK and Europe will be working through the end of what was a way of life - "supporting middle class incomes by borrowing money".

"In the next 10 to 15 years you are going to see regular crisis.

"Europe will remain a dark cloud on the horizon and could turn into a full-scale hurricane."

English said we can't make that problem paralyse us and we can't wait for it to be fixed.

He said the US has debt problems which could take a lifetime to fix.

There had been a lot of discussion about austerity versus growth. The Government wanted to get back to surplus in 2014/15, reducing our vulnerability to debt markets. High household debt plus government debt made us one of the countries in the world most indebted to foreigners.

"Don't expect more free stuff. If you come asking for even more governmentt funding the answer will be no - over the years there might be a freeze on some of your favourite governent funded programmes."

He said there had been a lot of discussion about the exchange rate. Despite having the highest exchange rate since World War II our exporters have still been able to grow their exports, he adds.

"We can influence that exchange rate in any direct manner," he said. They had talked to the US and European central banks but theydon't take instructions from the NZ government on how to run their monetary"policy.

He said the government had "open mind and open doors on what we can do to help your competitiveness".

English said a couple of years ago the Government committed to three major infrastructure projects that roll out over 10 years and decided to stick with these - roads of national signficant, broadband rollout, a commitment to Kiwirail spending $3.4billion turning it into "some kind of viable company".

Speaking on environmental constraints English said "we are not going to get higher incomes and more jobs if agriculture can't grow".

Despite media reports, he said Kiwis were very pragmatic when they understood what was at stake was jobs and security.

However he said there was a risk signficant economy decisions were being made by local government which would constrain agriculture unecessarily because decision makers did not take into account the economic impacts. Some local government was still stuck in the mindset when there whs plenty of money.

In conclusion English said: "We have a reasonable amount of confident for two reasons. Whatever happens Europe, Uk and the US, we still have on the doorstep one the fastest growing economies in the world.

"The second reason confident is theresilience we have seen over the last couple of years - I can't remember when there was less complaining in NZ or the farming community.

"I think that we have become more resilient .... instead of a people asking us to solve their problems they are solving them themselves.... and giving us advice on how to solve ours."

English said credit rating agencies told him our big debt to foreigners put us in danger of markets stopping lending to us, while investment agencies says New Zealand looks like a safe haven.

"One of them is wrong.... I think it shows the kind of confusion going on in current markets."

He said the problem over the next couple of years globally is likely to be deflation rather than inflation.

Earlier Federated Farmers president Bruce Wills said he had just returned from Europe and "the world is a scary place". He said believe what you read in the newspapers, things were very subdued.

Turning back the clock

Landcorp became a state-owned enterprise in 1987 as part of the fourth Labour Government’s massive economic transformation.

Technology, not taxes, is the way to deal with water related issues.

Doing well for a small outfit

Prime Minister Bill English recently spoke at the NZ Institute of International Affairs annual dinner and touched on trade. Here are excerpts from his speech.