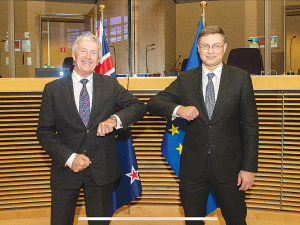 He claims the FTAs with both the UK and EU are progressing well - but are still not finalised.

Speaking to Rural News from Italy last week, where he was attending an APEC meeting, O'Connor says he's had positive discussions throughout his visit.

While he was in Ireland for less than 24 hours, he met the country's deputy Prime Minister Leo Varadkar - with the EU FTA being one of the key topics. O'Connor says he was seeking Ireland's support for a favourable FTA with the EU.

"There are sensitive issues and some Irish farmers may see us as direct competitors," he told Rural News.

"But there is a wide understanding in Ireland about the value of having a fair trading partner like NZ operating with the same high standards and values of production systems behind them. They have been good supporters of us and we just want them to continue to do that."

O'Connor says he pointed out that both countries export to the UK and other parts of the world and notes that it would not be uncommon to see Irish and NZ products alongside each other in supermarkets.

"It was a very valuable set of meetings where we highlighted the links between our two countries and the importance of us getting trade deal with the EU and that we would work alongside Ireland and not against it," he says.

After Dublin, O'Connor headed to Brussels to meet with one of the most important EU officials in terms of an FTA, Trade Commissioner Valdis Dombrovkis. He described the meeting as being useful at a critical time when some of the "sensitive issues" - meaning agriculture - were being discussed. O'Connor claims "good progress" is being made in the negotiations.

Earlier he was in Paris for a meeting of OECD trade and finance ministers and used that opportunity to the raise the FTA issues with relevant politicians and officials. One of these was French Trade Minister, Franck Riester.

"Again, we talked through some of the sensitive issues and getting their support for the inclusion of NZ into a trade agreement with the EU," O'Connor added.

"The feedback has generally been very positive, but we are mindful that in the end it's the detail around sensitive issues for both sides that is challenging." There was no stopover in London to meet with the new UK trade minister Anne-Marie Trevelyan to discuss NZ's trade talks. The pair were expected to meet at the G20 APEC meeting in Italy.

O'Connor says the FTA talks with the UK are still "progressing".

However, questions are being asked in NZ why it's taking so long.