One of a kind bull inducted into Hall of Fame 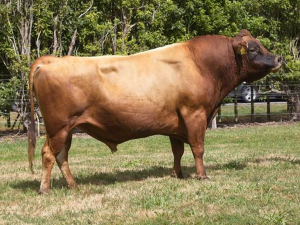 A “one of a kind” Jersey bull, Okura Integrity, has been inducted into the LIC Hall of Fame.

Okura has been recognised for the profound influence he has had on the profitability of New Zealand’s dairy farmers and in-turn, the economy.

The accolade was announced to some of the country’s top bull breeders who came together in Hamilton for LIC’s Breeders’ Day event recently.

The annual event celebrates an exclusive group of farmers who supplied a bull calf to the farmer-owned co-operative which went on to form part of their elite teams of artificial breeding bulls the year before.

LIC’s General Manager of NZ Markets, Malcolm Ellis, said although the event is annual, a new inductee into the Hall of Fame doesn’t happen every year.

“For a bull to be inducted into the Hall of Fame he needs to have made a significant influence on the dairy industry by producing genetically superior female offspring that farmers want to milk. Inductees do not only excel through the performance of their own progeny but also through the contribution of their sons.

There was no doubt in our mind Integrity has met both of these criteria with ease.”

Integrity was first made commercially available to the nation’s dairy farmers as a young bullin 2011 after his ability to sire high quality dairy cows was predicted using genomic science.

“His stats were remarkable and he continued to be selected to the Premier Sires teams as a daughter proven bull.”

Integrity is likely to become the first bull from any breed to achieve eight years in Premier Sires, after being preliminarily selected for 2019.

This would also create another first – a Hall of Fame inducteewho is part of a current Premier Sires team.

“For most bulls, the Hall of Fame honour is received posthumously as the quality of a bull’s offspring and its peak influence on the dairy industry is often reached after the bull is no longer with us.

With a BW of 243, outstanding capacity and very strong udder breeding values, he’s still at the top of his game.”

He’s also proven to be an exceptional sire of sons.

“It’s likely three of his sons will join him in this year’s Premier Sires Daughter Proven team. He really is one of a kind.”

Having bred 16 bulls that have gone on to become part of LIC’s Premier Sires teams, Luke and Lyna Beehre’s Okura stud in Northland is synonymous with bull breeding. But receiving this accolade is a first.

“Getting an Okura bull on to the Hall of Fame has always been a dream of ours. Watching Integrity get his own proof and seeing his sons come through the ranks allowed me to hope he might get there one day,” Lyna says.

“Breeding a bull that has added so much value to individual dairy businesses and our industry is a great feeling. We’re very excited.”

- 31 sons and 72 grandsons for the artificial breeding (AB) industry