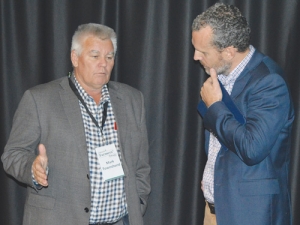 The pain New Zealand dairy farmers have endured for two years is now being shared round the world.

And the global pain is expected to lead to a gain in the milk price starting later this year, according to Rabobank's global dairy strategist Tim Hunt.

He told 800 farmers at DairyNZ's Farmers Forum in Hamilton last week that the milk price has belatedly started falling outside NZ, especially in Europe.

"We don't wish hardship on anyone but the situation has started to change; milk prices are falling big," says Hunt.

Hunt showed a chart of milk prices in June 2015; NZ was paying its farmers 7% less than the milk price at the peak of the global financial crisis – the only country to do so.

Farmers in Netherlands, Ireland, China and US were getting 25-50% more for their milk than during the GFC; Australian farmers were getting 75% more.

But things are changing: Dutch farmers are now getting 25-30 euro cents/L and Irish farmers 24 euro c/L. This has pushed farmers below operating cost, forcing them to borrow money to produce milk, Hunt says.

Hunt points out that of the seven major export regions, "five engines"– Uruguay, Argentina, Brazil Australia and NZ – have switched off.

The US is producing more milk but consuming most of it. The EU remains the big problem but that's not all: global economic growth has stalled.

"The world economy will grow and incomes will rise but it will be [slower]."

"[Even] if EU does slow, it's the last problematic engine.... We estimate all seven export engines will have switched off by the end of this year."

The world has about two weeks of dairy products in stock; China has been rapidly reducing its stock.

"Demand is growing incrementally; with supply stagnant we will work through stocks and onto a pathway to recovery."

Rabobank expects whole milk powder prices to average US$2500/tonne over the next 12 months.

"Prices may not come back as fast as we hope but we expect recovery to start kicking in next NZ production season."

Hunt puts a caveat on his forecast though; if EU production does not slow, price recovery will be delayed.

A possible upside is if Russia were to lift its ban on western dairy products demand would rise considerably, pushing prices up quickly.