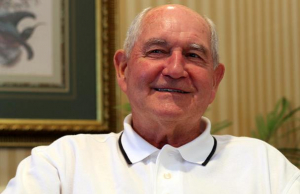 Announcing the appointment before he departed New York for his inauguration in Washington, Trump said Perdue will do “great things” as his new agriculture chief.

“From growing up on a farm to being governor of a big agriculture state, he has spent his whole life understanding and solving the challenges our farmers face, and he is going to deliver big results for all Americans who earn their living off the land,” said Trump in a statement.

Perdue said in a statement he would “champion the concerns of American agriculture and work tirelessly to solve the issues facing our farm families in this new role.”

The 70-year-old Perdue, a veterinarian by training, has deep ties to agribusiness. That helped him win over Trump, but it could also pose potential conflicts as he seeks confirmation to lead the sprawling US$140 billion U.S. Department of Agriculture.

As governor, Perdue led the state through two recessions, providing a steady fiscal hand but infuriating fellow Republicans when he vetoed tax cuts. He also became immersed in a battle over whether the Confederate battle emblem should appear on the state flag.

But Perdue also brought a deep religious faith to the job: He resisted efforts to expand alcohol sales on Sunday, and when the state suffered a devastating drought, he led a vigil praying for rain.

America's biggest milk producer, Dean Foods, has filed for bankruptcy and is planning to sell assets.

Kiwi farmers are not the only ones nervous about their future as a result of politicians throwing them under the harvester.

Here's an interesting take on the composition of US dairy cows.