Pigs thrive behind the wire 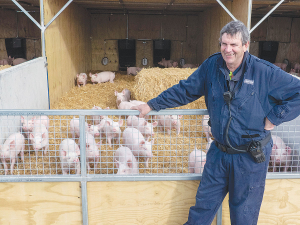 Chilton is the principal instructor at the Christchurch Men’s Prison farm, 804ha of mixed livestock and cropping surrounding the prison on the western outskirts of the city.

Also on site is a woodwork shop, so altogether there could be up to 40 low security prisoners “outside the wire” on any given day, training in the skills they will need on release.

“We are here basically for rehabilitation of prisoners, to give them work skills, work ethics, get them work ready and hopefully find jobs for them. That’s our main focus,” Chilton told Rural News.

The farm runs on a commercial basis so the prisoners get no surprises when they go into industry, he says.

About 60% of prisoners are effectively illiterate so literacy and numeracy are embedded in the training.

The farm was set up at least 100 years ago to feed the inmates. As it moved towards more commercial farming, the piggery was set up because the prison needed an industry that was labour intensive and suited to its light, free draining soil.

The piggery is now the major part of the farm. It runs 600 breeding sows, 66 boars as AI backup and 7000 growing pigs. Chilton describes the piggery as a “farrow to finish” operation, selling 17,000 animals to slaughter each year.

Ironically, for an operation where human prisoners provide the labour, the piggery’s products are sold NZ-wide under the Freedom Farm brand. The brand certification requires a range of strict animal welfare standards that start with no confining crates or concrete fattening pens.

Sows live outdoors, each with her own farrowing hut set in a small paddock separated from her sisters by electric fencing. The farm’s pigs also have wallows protected by shade cloths during summer.

Litters stay with their mothers until weaning when they start rotation through a series of light, airy barns with straw or woodchip floors. The pigs are free to wander with 24 hour access to food and water and are able to display normal behaviours in social groups.

“We get a premium for our product because that’s what customers want now,” Chilton said. “They want to know where their pigs have come from and that they’ve been treated nicely.

‘They’re not lying in crates and stalls and things like that.”

The piggery runs year round to a weekly rhythm. AI is done on Tuesdays and Wednesdays.

Weaners are taken from the sows on Thursdays, at an average age of 26.5 days and 8kg in weight. They are then reared through a series of eco-barns and micro-barns before going to slaughter at 138 days and 70kg dressed weight. About 100 go on Sundays, and 200 on Wednesdays. The farm also sells about 20 smaller spit pigs a week.

With two main sources of pig semen in New Zealand, the farm uses Waratah Farms semen for their replacement dam line and PIC New Zealand semen for the sire line. Chilton says this combines the best from both companies.

“It’s really changed the efficiency and performance of our pigs. They’re growing faster and leaner,” he says. “If you don’t keep improving all the time you’ll get left behind.”