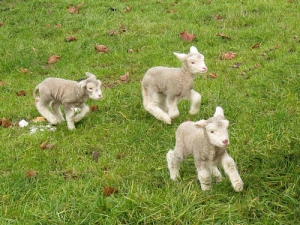 Increased feed supply over spring with nitrogen can help to finish as many lambs as early as possible.

With predictions the El Nino will continue through summer, Ballance says now is the time to proceed with a pasture and stock feed programme.

NIWA says there is a 'virtually certain' chance of the current El Nino climate pattern persisting into summer, with indications that this could be the strongest El Nino episode since the 1997-98 season.

Aaron Stafford, science manager at Ballance Agri-Nutrients, who is monitoring the strengthening El Nino trend says, "Top of everyone's mind is seeing the same weather patterns that were experienced during the last severe El Nino. There will be valuable lessons from 1997/98 and I'd encourage farmers who may be new to an area to talk to farmers who managed through that season.

"The result of an El Nino will likely be higher rainfall in the western and southern parts of the country and very dry central and eastern areas, with a more extreme drought risk," he says.

In the areas that will likely become dry, Aaron is advising farmers to make the most of the rainfall while it lasts by developing a plan to maximise grass growth and animal production early on in the season.

Stafford says these farmers should focus on the opportunity to apply nitrogen while there is still reasonable soil moisture.

In one examply he says lambs grow fastest still on the ewe, so increased feed supply over spring with nitrogen can help to finish as many lambs as early as possible. This could help farmers capitalise on a more favourable early lamb schedule, while also taking pressure off pastures when things start to get drier.

"Crops can provide high quality feed on farm, and can be very cost-effective when done well. Think about the type of summer crops you are using, and use more drought tolerant species like chicory or lucerne. These plants have deep roots and will grow through the dry summer period. Or, if you are using other crops, like turnips, get them in early so they become well established before it gets dry." says Stafford.

"Farmers on the wetter, west side of the country can take advantage of the extra rain and may be able to use nitrogen to promote additional growth through the summer, as long as conditions remain suitable. Take care to avoid pasture damage through pugging with the wet soil conditions experienced this spring, by rotating and moving stock often."

Stafford says feed budgets should be updated regularly and will indicate when nitrogen applications will be most advantageous, with early being likely to be best.

"The key to profiting from nitrogen is utilising the resulting extra feed effectively. It needs to go into filling a feed deficit or it should be turned into high quality supplement."

A dairy farming couple who have achieved a 48% reduction in nitrogen leaching have been named the Canterbury Supreme Winners in the Ballance Farm Environment Awards.