Plant-based a real threat to dairy 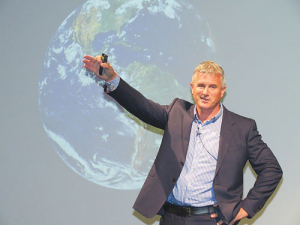 Speaking at the Australasian Dairy Science Symposium in Palmerston North, Penno told the audience of 200 that it’s much easier for a manufacturer to substitute traditional dairy ingredients with plant-based ones because they will generally cost less, and these are unlikely to attract much consumer resistance.

Penno says whole milks will much better head off consumer resistance against plant-based substitutes. But he acknowledges that many young people – especially women in their late teens and early 20s – are being turned off dairy products.

“I’m not saying this is widespread yet, because bovine dairy still dominates over plant. But it is important to look at where the change is [occurring]: in young people who are well informed and concerned about the impacts of large-animal production, climate change, water and animal welfare issues. Those concerns are driving their behaviour as consumers.”

Penno says young people are also influencing elderly people, especially those they are caring for. He noted research by a company that went into private homes to talk about people’s dairy preferences. An older woman said she always bought bovine milk, but the researcher looked in the refrigerator and found plant-based milks bought by the woman’s daughter.

“The changes we’re seeing now are just the start of a trend by some people to plant based milks.”

Penno says the NZ dairy industry has too long been wedded to the commodity business – collecting milk in tankers and drying it. Meanwhile farmers have regarded dairy companies as their customers, rather than looking outwards to the consumers.

Penno acknowledges the dairy industry is now doing a better job by developing new products to meet the needs of high-end consumers. He says consumers in Asia in particular are well connected via technology and will seek products which offer the best health options for their families.

The challenge for the whole industry now is to change, Penno says.

“I firmly believe we have let farmers down because we have focused on efficiency without looking at ways farmers can increase the value of their milk.

“If they increase the value of the milk, they will be able to differentiate it and make that milk more valuable to sell to a consumer somewhere in the world. A2 is an example of this. There is a set of consumers who can see the value in some of these new products and are prepared to pay large premiums for it.”

Looking to the future, Penno believes the dairy industry will be smaller and less intensive.

He says the point has been reached where any further expansion of dairy will have a detrimental effect on the environment.

“People say technology will solve many of the environmental problems facing the dairy industry, but this is some way distant and may have a limited impact.”

A smaller dairy industry will not be a bad thing, he says.

“In fact, I am quite excited about it because it will get people focused on value. For example, in Ireland, farmers and processors long ago were frustrated about living under quotas and watching the NZ dairy industry growing,” he says.

“But if you add up the total value created in Irish dairy over that time, they have done better than us. This is because while they couldn’t invest on farm they invested in other things, thought smartly and created impressive businesses from which farmers and the whole country benefited.”

Penno points to the Irish butter brand Kerrygold that is now the number-two brand in the US. He says if restrictions were put on milk flows in NZ and farmers were encouraged to produce higher value milk, they would also benefit financially. He says there needs to be greater focus on this and creating linkages through supply chains to the world’s best consumers.