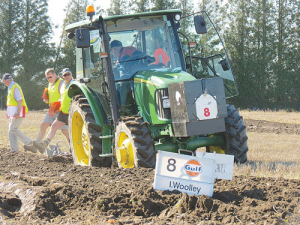 The warm and sunny weather helped make it a very successful event, says Colin Millar, who represents New Zealand in the World Ploughing Organisation. He says ploughing in NZ is still strong and it is good to have two new competitors in the conventional class and one in the vintage class.

Millar says NZ is very competitive on the international scene and several training courses for judges and competitors are aimed at lifting the standard.

“Our people going to international events need to be upskilled somehow and we are talking about how to do that and lift them a level,” he told Rural News.

This year Ian Woolley of Blenheim won the conventional class and Bob Mehrtens the reversible.

This means both will go to the world event in Germany in 2018. Both are already heading to Kenya this year after winning their respective classes last year in Manawatu.

Woolley described conditions at Kirwee as perfect: the ground conditions were superb and the event brilliant.

This year saw the staging of the 62nd national ploughing championships, near the town of Kirwee, Canterbury.

The event was held on Warwick Seaton’s farm and the forbears of the present owners were among the competitors in that first competition. Seaton is a fifth generation farmer on the property. He is on the local committee, but not competing, but his brother Ashley was.

The farm is 800ha of which 300ha is in crop and the remainder is used for finishing sheep and beef.

Seaton had been planning for the event for four years, making sure it was ready for the big occasion.

“It was just getting the crop rotation right: one grass and one stubble paddock. It took us about a week to get it right in the end,” he says.

Irish Farmers Association president Joe Healy has been in the top job only a few months.