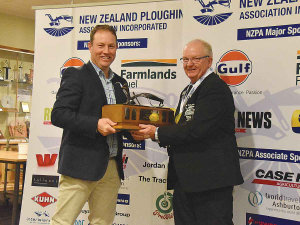 Ian Woolly (right) receives his trophy for winning the silver class at this year’s NZ Ploughing Champs from Nathan Winter of Farmlands Fuel.

Assuming it goes ahead given the Covid-19 pandemic, Taylor will compete in the reversible class and Woolly in the silver class.

The pair was selected as a result of the delayed 65th NZ Ploughing Championship, held late last month at Kirwee in Canterbury. It had been scheduled to be held in Central Hawkes Bay in April, but this proved impossible due to the Covid lockdown.

Ploughing Association chairman Willy Willets says as a result of the lockdown, the Hawkes Bay farmer who would have hosted the event could not hold up his normal planting programme and so they were lucky to be accommodated on Simon and Jane Reed’s property at Kirwee.

Willets says the weather presented some challenges, but they managed to hold a successful competition thanks to the help of farm owners and helpers from North Canterbury Ploughing Association and Oxford Working Men’s Club Ploughing section. He says Oxford Ag kindly loaned some young men to help and the executive members came in and measured the plots and placed the numbers on them.

“On Saturday morning, it was drizzling and this continued all day, and the mud was a menace, but we carried on,” he told Rural News. “On Sunday, there was fog but it got better later in the day and the event went well.”

Runner up in the reversible was Bob Mehrtens and third was Ashley Seaton. Meanwhile, in the silver class, Simon Reed was second and Mark Dillon third. Murray Grainger won the vintage class and John and Sharon Chynoweth the Rural News-sponsored horse class.