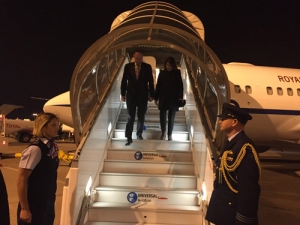 A further $20m was pledged by Prime Minister John Key at the UN Climate Change Conference in Paris for research into reduced agricultural greenhouse gases emissions.

The funds will go over four years to the Global Research Alliance on Agricultural Greenhouse Gases which New Zealand helped establish. The new funds are in addition to the $45m already committed by the NZ Government.

"The Alliance is gaining real momentum so I'm pleased to announce that New Zealand is going to boost its funding by $20 million over four years, to capitalise on some exciting new research to reduce methane emissions," Key told the Paris conference.

Key told the conference it must produce a meaningful agreement.

"New Zealand wants a deal that puts the world on a pathway towards limiting global temperature rise to no more than 2°C," he said.

"Every country needs to contribute towards this goal. While New Zealand's emissions are small on a global scale, we are determined to make a strong contribution to the international effort.

"That's why we have set ourselves a target of reducing greenhouse gas emissions to 30% below 2005 levels, by 2030. A significant increase on our current target of five percent below 1990 emission levels by 2020.

"We wanted to ensure our target was achievable and didn't impose unfair costs on any particular sector or group."

"Almost 80% of our electricity already comes from renewable energy and around half of our emissions are from agriculture, where there are not yet cost effective technologies to reduce emissions. But we are working hard to change that."

Key also announced New Zealand would provide up to $200 million for climate-related support over the next four years, the majority of which will benefit Pacific nations. This builds on the $65m New Zealand has already spent over the last three years to help Pacific Nations secure reliable and clean energy.

"New Zealand has been at the forefront of efforts to shift the Pacific from reliance on fossil fuels to renewable electricity. This work to address energy insecurity and build resilience will continue as we step up our support for climate change adaptation."

Key says New Zealand is also taking a strong lead in the global push for the removal of fossil fuel subsidies.

"Earlier today I delivered UNFCCC Executive Secretary, Christiana Figueres, a message on behalf of close to 40 nations calling for the removal of fossil fuel subsidies.

"Countries subsidised fossil fuels to the tune of US$500 billion in 2014. Removing these subsidies frees up money which would be better spent on low-carbon energy, health or education.

"It also makes no sense to be calling for emissions reductions on one hand, while subsidising emissions on the other.

"These are practical initiatives aimed at getting real outcomes."

"The Government takes climate change very seriously and we are committed to ensuring New Zealand does its fair share."