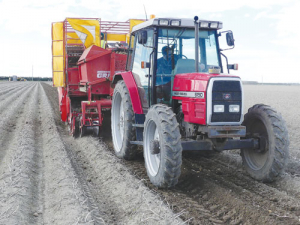 The potato sector’s total industry value at the end of 2017 was $982 million – making it close to a billion-dollar-a-year industry.

“We don’t see a boom and bust with potatoes, just a gradual improvement,” he says.

The sector is now close to a one billion dollar industry.

Claridge says looking at the value of exports per hectare they estimate the export receipts per hectare are three times that of dairy.

“Our environmental footprint is good as well, so it is a good crop in terms of generating domestic value and export opportunities.”

He says Potatoes NZ set up a strategy in 2013 to look at three key targets. The first was to increase the profit for growers by $150/ha per annum.

“We have gone back and looked at how we are tracking against those key industry targets and we found the 2013 farmgate value of $103 million increased to $170m in 2017,” Claridge told Hort News. “So we have seen an increase of 65% at the farmgate over that period.

“Our hectares have remained reasonably constant – we are planting about 10,000ha per annum – and there has been a corresponding increase in the farmgate value of that crop.”

“We had an annual growth target of 3.5% and our current growth rate in the domestic market is 5% so we are on target to reach our goals,” Claridge says.

The industry has 173 growers, many based in mid Canterbury.

“We have two large processors – McCains in Ashburton and Talleys in Timaru -- and smaller processors, Mahikhi Fries, Heartland Chips and Mr Chips, with small plants at Christchurch.

“Heartland is a good example of vertical integration where the farming family is both a grower and processor,” Claridge says. “But then you see bigger, more international corporate models in McCains. So there is room for both types of operations in the marketplace.”

The industry sees opportunities in fitting in with other farming practices – small seeds, specialised seeds, mixed cropping and dairying.

“Potatoes go quite well in a rotation system.

“The industry also has good added value – a mixture of retail ready and food service products.”

The potato industry has a clear strategy and key strategic initiatives to achieve its three goals, says Claridge.

They fall into the three main themes of market, quality and R&D.

“We work in R&D alongside Plant and Food, Otago University and Massey University to identify onfarm and off-farm research projects,” he told Hort News.

“The market strategy is to promote healthy chips and fresh table potatoes. We work with a lot of strategic partners to develop healthier chips.

“We have our best chip shop competition coming next year. We hold that every two years. We have just had the People’s Choice chip shop awards and 500 chip shops entered.

“We continue to promote fresh table potatoes as a complete meal -- you could live on them. People call them nature’s vitamin pill,” Claridge adds.

“We are positive about the future: potato consumption is steady, we have seen good returns in export markets for fresh table potatoes. We are competing well against rice and quinoa which we think should be [supplemented] by potatoes at all times.

“Consumers are always concerned about health. We have potatoes that cover all consumer requirements. We have the low carb potato Lotatoes which have been a very popular Turners and Growers brand, then you go to your classic Oamaru Jersey Bennies and more staple Ilam Hardies. There’s potato for almost every occasion.”

The industry strategy also emphasises good biosecurity systems and quality and ensuring that high quality seed for the industry is maintained.

The inability to bring in experienced overseas workers is one of the big difficulties for the potato industry as it heads into the next growing season amid COVID-19.