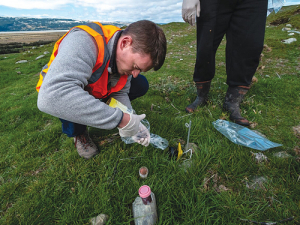 Scientists say although the new rabbit calicivirus is working as expected, farmers are not seeing the knockdown they may have hoped for.

The new strain of rabbit haemorrhagic virus disease, RHDV1-K5, was released several weeks ago at 150 sites.

Manaaki Whenua (Landcare Research) has monitored release sites since then.

“The first thing we wanted to know was whether the virus was killing rabbits within 5km of our release sites and that seems to be the case. So far we’ve detected the RHDV1-K5 in carcases at all the research sites,” lead researcher Dr Janine Duckworth told Rural News.

Davies says his own coastal farm has very few rabbits. But his “personal speculation” is that the virus was released a bit too late in the season when the vectors -- fleas -- were less active.

“I think they would like it reasonably warm otherwise they’re not going to be moving from host to host.”

Davies’ neighbour Allan Gunn, whose property is one of the release sites, agrees that the disease appears slow to act. But a particular pair of rabbits he had often seen on his property finally disappeared some weeks after the release.

Gunn says he was dubious at first, but the rabbits have since faded away, although “it wasn’t as quick as the last virus acted”.

The new variant is a Korean strain of the one illegally released in 1997; that was described as a Czech variant after it was first identified there.

Duckworth says they expected zero to 40% knockdown from the new virus, depending on how many susceptible rabbits were in the area. But there are places where the Czech virus will have recently gone through, giving some immunity.

“One of the major differences with this virus release is the rabbits have already seen RHDV type viruses and have built up some antibodies against them, so it’s not going to see the huge 80-90% die-off we saw in 1997; but it will be more effective over time.

“When you use a biocide it only affects the rabbits that eat the virus and then they die within one to two weeks. With a natural spread, the infection builds much more gradually but we see a longer period of infection. It will be six to eight weeks that the virus will still be slowly spreading through a rabbit population and we want to see this virus establish and be here long term as a new biocontrol agent,” Duckworth says.

Meanwhile, early data from the monitoring appeared to confirm the Australian experience, that flies are an important vector for the disease.

“What we’re not sure about in New Zealand is how far our flies move and how quickly the virus will spread here because we have a different fly population to that in Australia,” Duckworth says.

“RHD1K5 has been found in flies around the release sites and some distance away from those sites. So it looks as though the situation is similar to Australia and flies are an important vector for moving the virus longer distances.”

She says RHDV spreads either by rabbit to rabbit contact, contact of rabbits with faeces from an infected rabbit or from bedding material.

“But it also spreads across the land much faster than it could by rabbit-to-rabbit contact.”

Duckworth says monitoring and research are continuing. Spotlight night counts of rabbit populations are underway and will last for a few weeks.