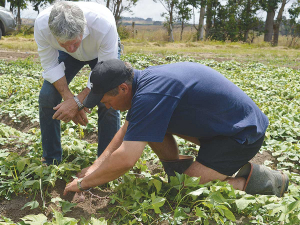 With 40 hectares of kumara crop under the ground, he remains hopeful.

“It depends on how long the dry weather lasts,” he told Rural News.

“As long as the dry doesn’t get too severe and kill the plants, we should be okay.”

De Bruin says it’s hard to say how the dry weather will affect this year’s crop.

“We will only find out during the harvest,” he says.

Kumara is planted around November and December in Dargaville; from planting it takes about 120 days to harvest.

Some of the crop is transported directly to markets around the country; the remainder kept in storage for supply throughout the year.

De Bruin says while his farm is very dry, other farmers in Dargaville are better placed: some have had rain and some access to irrigation.

O’Connor, who spent a day in Northland, says ground conditions across the region are varied.

He praised the resilience of farmers, saying good farmers are more prepared for such climatic events.

“Most farmers have got it... they need to be more prepared in future for disruptive events.”

O’Connor says mixed farming models will help farmers not only diversify their income but provide buffer to their incomes during droughts and floods.

On the possibility of a drought being declared in Northland, O’Connor says his department is working with Federated Farmers and Rural Support Trust with “a set formula”.

“We must not overreact and too quickly declare a drought: building reputation around an area for being unreliable as a farming block,” he says. “There are downsides to declaration of a drought: such areas can be seen as losing the ability to farm sustainably and this can impact land values.”

Taylor says milk production is falling behind, compared to last season as farmers are drying off early.

On his farm in Taylor has dried off cows that would be calving in autumn: he’s done this a few weeks earlier than usual.

“We need rain soon to ease the pressure, if not things are going to get quite difficult.”

Authorities are concerned that some flood-affected farmers in Southland are not asking for help.

Why is Jacinda not in Southland?

Questions are being raised about the government’s lack of concern for Southland flood victims.