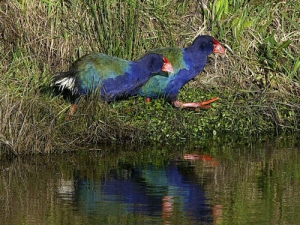 There is relief in the deer sector as the investigation into the accidental killing of takahe on Motutapu Island has been completed.

New Zealand Deerstalkers' Association national president Bill O'Leary says, "People who took part in the cull managed by the Department of Conservation were volunteers with every intention of removing pukeko predating on takahe nests.

"In the event four takahe were shot among more than 600 pukeko in what were clearly unintentional mistakes made by two members of the shooting party who failed to correctly identify their target.

"Positively identifying your target is a fundamental rule for hunters and all safety messaging hammers that.

"The association is distressed that in this instance the rule was broken."

He says the NZDA was satisfied that the investigation carried out by the department was professional and thorough and he does not believe that the relationship between the two organisations has suffered.

"The NZDA has worked with DOC a number of animal and bird management operations throughout New Zealand and expects that this will continue."

Not so wild about pines

Concerns about the continued spread of wilding pines are coming from both ends of the country.

Department of Conservation scientists are getting promising results from a pilot study aimed at pinpointing wilding pines from the air.

War on rabbits takes next step

New Zealand is about to open a new front in the war on rabbits with the expected release of a new strain of rabbit haemorrhagic disease, or calicivirus.

Farms are expected to benefit from experimental work by the Department of Conservation and Fonterra as they jointly trial floating wetlands in Waikato.