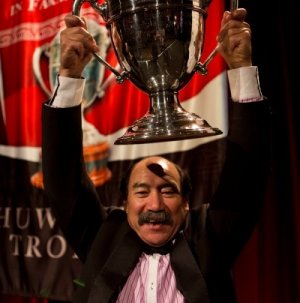 A commitment to maintaining land and resources for future generations was a strong theme at Saturday's final of the prestigious 2012 Ahuwhenua Trophy – Bank of New Zealand Maori Excellence in Farming competition which was won by the Kapenga M Trust from Rotorua.

"Look after Mother Nature and she'll look after you. Recognise when she is stressed and work with her as naturally as possible to achieve a sustainable environment," he said.

The Kapenga M Trust, a dairy farm operation, has 915 shareholders of Tuhourangi descent.

The Governor General Jerry Mateparae presented Mihinui with the trophy before an enthusiastic audience of over 580 people.

Sponsor BNZ's head of agribusiness Richard Bowman, who presented the winner with a gold medal, said BNZ had long recognised Maori agribusiness is a dynamic part of the wider sector.

"We have sponsored the competition for 10 years now and have seen it, and the farms it showcases, go from strength to strength and become industry leading businesses for the benefit of their iwi, communities and the country as a whole.

"We're truly honoured to partner with this prestigious award and recognise the mana associated with all who are connected."

The other two finalists in the competition were Tauhara Moana Trust (Taupo) and Wharepi Whanau Trust, (Te Puke).

"At the heart of their success is the priority they put on environmental and cultural concerns. They know that as the current caretakers of their land they are responsible for ensuring this precious resource is available to future generations to provide for themselves and their families and to contribute to the wealth and prosperity of the whole country," he said.

The Ahuwhenua Trophy is the premier award for Maori in agriculture. It acknowledges and celebrates business excellence in the New Zealand pastoral sector and is open to Maori farming properties either owned individually, or managed by Maori Trusts and Incorporations in New Zealand.

Each year it alternates between beef and sheep farms and dairy farms. This is the fourth year since the competition was revived in 2003 that entrants have competed for the Ahuwhenua Trophy for excellence in Maori dairy farming.

The winner of the Young Maori Farmer Cadet/Trainee Award was announced earlier in the evening. The inaugural winner was Tangaroa Walker (Ranginui/Pukenga). This, another prestigious award, is sponsored by AgITO, Te Puni Kokiri, Allflex and Maori Trustee.

OPINION: Damien O'Connor is never one to shy away from speaking his mind and ruffling a few feathers, and in a nice way he did this at Federated Farmers’ conference last week.