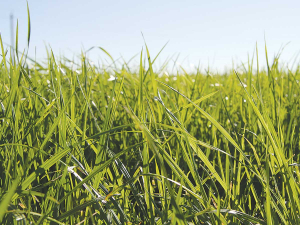 Barenbrug Agriseeds has made its premium Shogun grass seed available “at close to cost” for Southland farmers.

Barenbrug Agriseeds is inviting Southland farmers to get in quickly on a special rate for hybrid grass seed to help repair flood-damaged pastures.

The company has made its premium Shogun grass seed available “at close to cost” and pasture systems manager Blair Cotching says there has already been some uptake from farmers and customers.

But he advised them to move quickly.

“It’s the end of February now, heading into March. You’d expect it to start cooling down relatively quickly.”

More than 1100 farms have been identified by Federated Farmers in priority flood zones, with many having suffered damage to infrastructure as well as pastures.

Cotching says Barenbrug has made Shogun available to several Southland retailers “at a significantly reduced price” to help farmers get pastures up and growing again as soon as possible.

“In most cases, pastures under water for less than a week, or under 2-3cm of silt will grow through and recover.

“The real concern is where more than 5cm of silt has been deposited, because this often kills the pasture underneath. In these situations, farmers will probably need to re-sow.”

Cotching says Shogun is ideal for flood recovery, because it is very fast establishing, can generate high volumes of feed in a relatively short period of time, and lasts in Southland conditions.

“Especially down South it could last four or five years. It’s a perennial crossed with an Italian ryegrass so you’ve got your perenniality, and your Italians are normally three or four year grasses, so it’s in the middle.”

A lot of people were still assessing the damage but his recommendation was to have a look at all paddocks and rank them.

“Even at around 15% damage it is actually worthwhile regrassing, in terms of the cost of regrassing and the value gained. You’re basically losing 15% production annually if you’ve got 15% covered in silt so it does add up pretty quickly in terms of impact on farmers’ bottom line.”

Most flood deposits have little to no organic matter, are low in N and may be low in P and S.

Shogun seed can be direct-drilled if appropriate, or sown after cultivation if paddocks need to be worked and aerated.

“These events are highly stressful and disruptive, especially as we head into autumn with many winter feed crops already behind where they should be, and in some cases on-farm supplements waterlogged or lost in the floods.

“We’re keen to help wherever we can, and we also encourage farmers to make full use of the resources and information available from DairyNZ and Beef+Lamb New Zealand.”