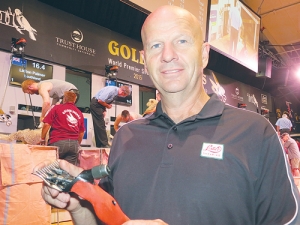 Fagan's knighthood was announced in the recent new year honours list and recognises his 30 years at the forefront of competitive shearing sports until his retirement last year.

Fagan won 642 open championships, was an individual world champion five times and a world team champion seven times. He was the first shearer to exceed 800 lambs and 700 ewes in a nine hour working day under world record rules. He has represented New Zealand at least 120 times in various teams.

He was recently appointed chairman of Shearing Sports New Zealand and been on the committee of the New Zealand Shearing Championships since 1985.

Fagan has played a huge role in the promotion of his home town of Te Kuiti as the shearing capital of the world.

Others in the ag sector to recognised in the honours list were farmer John Lee who receives the CNZM for developing a number of tourism businesses in the Cadrona Valley.

The ONZM has been awarded to David Civil for developing dairy by-products as a fertiliser. Dr Andrew McEwen received the same honour for his services to forestry and Professor Norman Williamson also received the ONZM for services to the veterinary profession.

MNZM's were awarded to Jonathon Kirk for devising the K-Line spray irrigation system and Linda Nelson for services to agriculture and women.