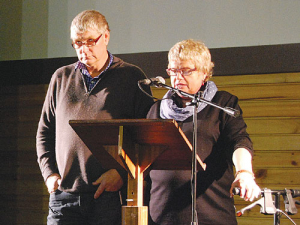 The 2016 South Island Farmers of the Year, Neil and Lyn Campbell, tell their story at the winner’s field day presentation held at the Fairlie Community Hall. Photo: Rural News Group

Merely being in the top 10% of meat producers was not enough for the 2016 Lincoln University Foundation South Island Farmers of the Year, Neil and Lyn Campbell.

Speaking at the recent winner’s field day, Neil Campbell said being in the top 10% on measures such as lambing percentage and liveweight produced, “put groceries on the table, but not much else”.

His life-changing experience came with the chance to participate in the 2007 Kellogg Rural Leadership Programme when he learned to push his comfort zone and, with thorough research, gain the confidence to run with new stock classes, crops and systems.

“Studying the history of New Zealand’s meat industry, I quickly concluded the meat industry wasn’t going to change so our business had to,” he says.

The Campbells farm the 760ha Parkwood Farm, near Fairlie, which ranges from 350m to 580m altitude, with silt loams in the valley and clay downs at altitude. With no irrigation, rainfall also varies by year and altitude.

They now produce sheep, deer breeding and finishing, dairy heifer grazing and a variety of crops including 50ha of fodder beet.

The Farmer of the Year judges commented on the Campbells’ ability to optimise systems to maximise efficiency and profit.

Speaking to 300 people at the winner’s field day – held at the Fairlie community hall after strong interest prompted organisers to change the venue – Lincoln University councillor Andy McFarlane said the Campbells were thoughtful leaders, ready to innovate after careful assessment of new methods.

“[They are] not often the first people in the world to do something, but first to be second,” he told field day-goers.

Campbell says they had realised their good soil wasn’t being optimally utilised with ryegrass pastures, and most of their stock was coming ready to sell between January and April, the time of peak supply and poorest returns per kg of product. They needed a better way to determine the most profitable stock classes and how to fit them in their systems.

“We now base all our stocking decisions on cents earned per kg of dry matter consumed as the starting point.”

Despite being in the top 10%, they had been getting “very average returns” of about 10c per kg.

However, he says putting breeding hinds on the farm’s higher land, where spring growth came later, made a very good fit with feed supply and demand and resulted in returns of 20c/kg.

Meanwhile, 80ha of the better soil on the valley floor, with lower rainfall than ryegrass needs, was now in arable crops, including at least 50ha in fodder beet.

Paying tribute to the “huge contribution” made by plant breeders, Campbell they rarely get four good seasons in a row and it is hard to pick which season will let you down, “so a crop that can be fed as early as March or as late as November offers huge security to our dryland farming environment”.

Although a new crop to NZ, fodder beet is already being grown over a greater area than wheat. It grows well even in dry years, with a wide window to utilise or harvest, and bulbs can be left all winter with no deterioration in quality and can be consumed in the paddock or lifted and sold.

“This plant has had a huge impact on our business,” says Campbell.

They also diversified into wine in 2011, buying an 8ha sauvignon blanc vineyard in Spring Creek, Marlborough, a compelling investment because the target market for sauvignon blanc is “middle class Australians and Americans”.

Fully managed with no hands-on by the Campbells, the vineyard gave them a 15% return last year.

Meanwhile, at the field day the Campbells revealed their next move – leasing two-thirds of the farm to Stuart and Ginny Neal of Neal and Co Farming, who also spoke of their journey in farming.

The Campbells will retain the deer unit under the new arrangement. Acknowledging the rarity of leasing in sheep and beef, Campbell says there are many models of ownership in dairying -- share milking to contract milking and many variations in between.

The relationship with the Neals is a “work in progress and an exciting time ahead,” he says.
Tweet