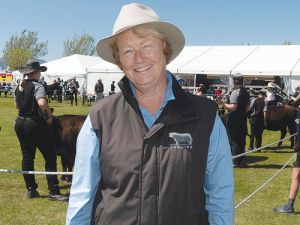 When Rangiora Lowline cattle breeders Philip and Kay Worthington hit the A&P show circuit it is usually with a small herd of young people as well as animals.

For ten years they have worked with Rangiora High School to offer students onfarm training in cattle safety, breaking-in, handling, showing and judging.

Students visit their farm two afternoons a week then attend four shows: Rangiora and Christchurch in spring, then Malvern (Sheffield) and Oxford in the later season, where they help prepare and parade the animals, and compete themselves in handling and judging classes.

The Worthingtons took 15 students to this year’s New Zealand Agricultural Show at Christchurch, their biggest team yet. It included a couple of primary-age children and a couple of recent school leavers, but most were students of the school’s land-based studies department.

Department head Gillian Koster says the school teaches animal husbandry and horticulture in the junior school, and agricultural science, rural studies, primary trades and equine in the senior school. Although no subject requires animal handling for credits, she said that without the Worthingtons’ programme the students wouldn’t get “that real good thing of going to the show and the high it gives them when they manage to do this, get these cattle to walk around beside them, perfectly behaved; kids love it”.

The Worthingtons run the Woolstone Park Lowline cattle stud at Fernside, near Rangiora, where they also farm Angora goats and expanded into Lowlines about 1999.

They started the school programme in 2009, after Philip became aware of a similar scheme run by Queensland Lowline Association members with the Pittsworth State High School, west of Brisbane. They have maintained the link, with occasional student exchanges and trips to Queensland shows.

Their work was recognised recently by Kiwibank which awarded them Local Hero medals.

Kay Worthington said she enjoys the programme, despite her initial doubts that taking “other people’s kids” to the show was a good idea.

Kay said the students all loved handling animals but some needed “a gentle nudge” into the stock judging competitions, in which young people have to judge animals and speak about their reasoning.

“We require them to do that because they learn more about the animals themselves, especially those who are talking about getting jobs as stock agents.”

The programme allows the stud to break-in and show many more animals than they otherwise could, while for the youngsters “it’s opening doors – or gateways, I guess – into agriculture”.

“The idea is the kids get more experience with larger farm animals, but [the Lowlines] are not too large to be intimidating or daunting. It just opens opportunities they probably never knew existed in careers in agriculture.”

Some of the students over the years have gone on to roles such as reps in agribusiness: one went to work for Ngai Tahu’s dairying operation as a calf rearer, one is a now a vet nurse and one is a vet technician. Another went to the Five Star Beef Feedlot near Ashburton.

“A boy now on a dairy farm in the local district hadn’t thought about going into agriculture at all until he did this in his fourth-form year a few years ago.”

With cattle numbers down at this year’s Christchurch show, only two competitors were showing Lowline cattle. The Worthingtons won all four champion ribbons plus the supreme champion Lowline for cow and calf.  They also won a second placing in the interbreed pairs, and two seconds and three fourths in the all-breeds sections.

“Philip always values those all-breeds ribbons because you’re up against South Devons and other big breed animals.”