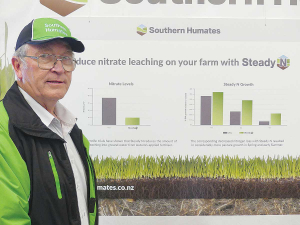 Malcolm Sinclair of Southern Humates says research has shown the benefits of his lignite-based humate products.

A man who bought an opencast Southland lignite mine 18 years ago no longer sells the coal for fuel, but sings its praises as stock food, fertiliser and soil conditioner.

Malcolm Sinclair’s Southern Humates company quarries and powders lignite into products known as humates – including a stock feed and straight humate used as fertiliser. It also provides raw material to other suppliers, such as human dietary supplements.

Lignite is a soft brown coal, produced by compression of organic matter, but is geologically young and regarded as half-way between peat and hard coal.

That means it remains high in biologically-active humic and fulvic acids – although its low heat and high carbon dioxide output when burnt make it no longer welcome as fuel.

Sinclair has been producing humates for seven years.

Speaking on his stand at the Southern Field Days at Waimumu, he explained that soils ideally have a 50:50 balance of fungi and bacteria. But Sinclair says fungi levels are naturally low in New Zealand soils and further depressed by farming methods of added phosphates and nitrates.

“The humic acid feeds the fungi and brings them back,” he told Rural News.

Although humate use remains controversial in some quarters, it has wide acceptance in organic, regenerative and biological farming.

Southern Humates is BioGro organically-certified and sells from Whangarei to the Bluff, he says.

Sinclair says humates give the soil the ability to hold on to nutrients by a process known as chelation.

Sinclair says that as a stock feed, humate promotes bacteria in the gut, to sort out spring scours by restoring the breakdown of the mucous lining.

He says the animals regulate their own dosage depending on their needs.

“We just feed it ad-lib. One day they’ll eat a lot, next day they won’t eat a lot at all.

“Animals are like that - sheep eat soil to get the nutrients and minerals out of it.”