Southland teeters on the brink 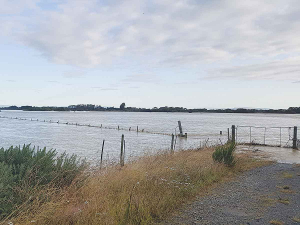 The Oreti River lapping at the top of the stopbank at the height of the Southland floods back in February.

While Hawkes Bay and other parts of the country are suffering drought, Southland is facing different problems.

Flooding earlier in the year and the failure of some winter crops – on top of a lack of space at the meat works – has left Southland teetering on the brink of a really bad situation going into winter.

DairyNZ’s lead consulting officer in the South Island, Tony Finch, says if dairy farmers in the region can’t get rid of cull cows soon, and if the weather doesn’t play its part, these problems will get even worse.

Southland is facing a major feed shortage – not because of drought, but because of too much rain. Finch says farmers in the region came out of a pretty hard winter and a very wet spring last year, which delayed any winter crops being planted in the spring.

“A lot of crops failed because of the wet, resulting in yields that have been severely checked now as we come into winter, with some as much as 40% down,” he told Rural News. “On top of that, there is a significant winter feed challenge because during the floods some feed was lost and farmers just had to keep feeding out to keep their farms going during this period.”

Finch says there has been a little bit of good news in that autumn has been very good. However, many animals are grazed off on winter crops and he says that’s when the challenge will come.

At the moment, the big issue for dairy farmers in Southland is getting their cull cows through the works. This is not a COVID issue because on beef chains the normal distance between workers is about a metre or two. The problem is a huge backlog.

“We have been told there is a four to six week delay and that will mean that it won’t be until end of June before the backlog is cleared,” Finch told Rural News.

“In the meantime, some farmers are carrying in excess of 50% more culls than normal and they still have to be fed.

What you have is extra animals to feed and less grass and so all it will take is a bad weather spell, and Southland does have these, and it will provide a lot more anxiety for farmers.”

Finch says like their counterparts in the North Island, Southland farmers have been looking at reducing their herd sizes, but again the delays in processing at the works is challenging this move. He says many can’t afford feed and those that can are finding it difficult to source feed.

“Silage is simply not available and the option of using PKE or grain is only possible if farmers have indoor facilities to feed this to animals. It is bringing the level of anxiety to the stage where they are saying ‘oh shit, what am I going to do here’,” he says.

Finch says DairyNZ is working with Beef+LambNZ and other strategic partners to try and help farmers do feed budgets and get good professional advice on how to manage their way out of the crisis.

He says, so far, farmer wellness hasn’t reared its ugly head, but warns that a bad spell of weather could change that.