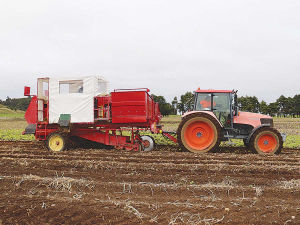 NZ government officials have started an investigation into cheap frozen chip imports being dumped into the country.

Industry body Potatoes NZ (PNZ) says it is relieved that the Ministry for Business Innovation and Employment (MBIE) trade remedies team has launched an investigation into the proven threat of surplus frozen fries being imported into New Zealand.

However, any outcome of this investigation is likely to be many months away.

PNZ first raised concerns about European suppliers dumping surplus frozen fries cheaply into the local market in the wake of the Covid pandemic.

“This MBIE decision was based on the positive evidence the New Zealand potato industry provided in this application,” PNZ says.

“The dumping and threat, combined with the effects of supply chain disruption caused by Covid-19, created an extraordinary situation that required investigation.

“Globally, the disruption of supply chains, and particularly sales to hospitality, by virtue of Covid-19 restrictions, has led to huge surpluses of frozen fries in major production centres – in particular the European Union (EU).”

PNZ says this has led to extraordinary surpluses in frozen potato chips and processing tubers in the EU.

According to PNZ, the NZ industry remains concerned that, along with the existing domestic impact of the pandemic crisis, any profiteering activity from overseas exporters, will in turn cause further damage to the New Zealand potato-growing and potato-processing industries.

It says, at the time of the application, the potato surplus in Europe was 1.5M tonnes, today it is estimated at 2.6M tonnes and growing by the minute due to the impacts of further lockdowns in parts of Europe.

PNZ says the situation is not unique to the NZ potato industry.

“In recent months, the US and Australia have also called for duties or actions to limit what they see as under-priced EU fry imports,” it explained. “The South African Vegetable Processors Forum, which includes Potato South Africa, McCain Foods South Africa and Lamberts Bay Foods, wants to see the South African Government take anti-dumping measures against EU exports, echoing calls coming from Australia and New Zealand.”

PNZ claims that other NZ industries may also be facing trade threats as a consequence of Covid-19 and believes it has led the way in New Zealand, by quickly utilising the toolbox available through the World Trade Organisation and MBIE.

It may take up to six months for MBIE to investigate, with both foreign exporters and NZ importers notified of the investigation.

The inability to bring in experienced overseas workers is one of the big difficulties for the potato industry as it heads into the next growing season amid COVID-19.

Chips down for NZ spuds

New Zealand potato growers want duties imposed on frozen potato imports coming into the country from Belgium and the Netherlands.