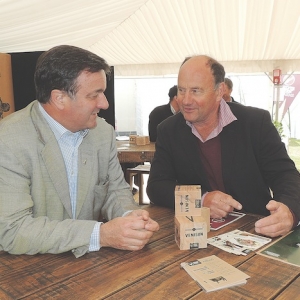 Speaking to Rural News at last week’s Canterbury A&P Show, Silver Fern Farms’ chief executive Keith Cooper said if there was something going on that he believed would change the industry model to the benefit of all stakeholders, he’d probably have stayed on.

But as it is, he’s looking forward to retiring in December, having made that decision “absolutely” of his own accord back in April.

“It’s a stalemate position. The industry as a whole is not seeing the opportunity of the prize at the end and everybody is still protecting their own patches. Farmers are all calling for change but no-one is capable of delivering it because they’ve all got divergent views.”

The acid test of whether that’s the case, or whether, as some have claimed, it is “egos” among the cooperatives’ leaders preventing progress, will come in the New Year when both cooperatives will have relatively recently appointed chairmen leading their boards, and new chief executives. “Then we’ll see whether it’s egos or just the reality of the industry.”

Cooper says his biggest disappointment in his eight years at the helm of Silver Fern was that the partnership with PGW didn’t go through. “It got approved two weeks before the global financial crisis in 2008 and when PGW went to the banks for the capital they said the world had changed and they couldn’t have it.”

He lists his highlights as pulling PPCS and Richmond together after the “acrimonious” process of the buy-out, rebranding PPCS as Silver Fern Farms and moving it “into the food business” with retail packs and brands, and, more recently, the Farm IQ PGP with its Beef EQ (eating quality) measurement and related retail assurances, and soon to be rolled out Lamb EQ – not to mention the Farm IQ integrated farm management system.

But the number-one topic farmers coming onto the cooperative’s stand at the Canterbury A&P Show were talking about was the buoyancy in the beef market, he said. “It’s put a bit of a spring in people’s step.”

Lamb prices are also looking positive and reasonably sustainable with $100/head at peak kill on the cards, provided the currency doesn’t take off again. Compared to other meats it is at the top end of the price range at that, but not out of touch with beef or the cheaper options of pork or poultry, he points out. “Lamb can be more expensive than white meat but it can’t be way out of the ballpark.”

Your old mate reckons former Silver Fern Farms sales manager Grant Howie has done a poacher-turned-gamekeeper conversion since he left the meat company to do business on his own account.